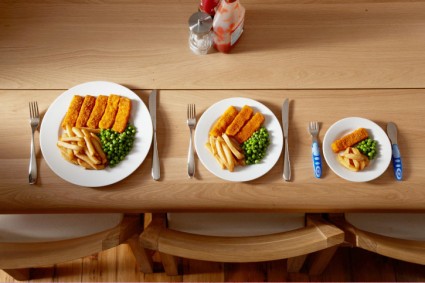 When it comes to food, humans aren’t great with self-control — as evidenced by the fact that more than one in 10 of the world’s adult population is obese. If you can’t muster up the self-control to resist another bite, try tricking your brain into eating less with these 10 tips (no hypnosis necessary).

1. Use small plates and bowls.

A study published in January 2012 in the Journal of Consumer Research discovered that people tend to serve themselves considerably less in small bowls than large bowls. Researchers theorized this was because of the Delboeuf illusion in which two circles of the same size are placed close to each other. One is surrounded by a large ring (think a large plate), and the other is surrounded by a smaller ring (think a small plate). This illusion makes the circle (i.e., our food) surrounded by the large ring appear smaller, so we end up serving ourselves too much.

A 2006 study also found that even nutritional experts dished themselves (and ate) more ice cream when given larger dinnerware. Oddly enough, when this experiment was altered so that people were eating in isolation, the dish size had no effect.

2. Make sure your plate or bowl is a different color than your food.

The 2012 Journal of Consumer Research study previously mentioned also found that the color of your dishware matters. The bigger the difference between the food color and the plate color, the less likely participants were to over-serve themselves. In other words, you’re better off serving tomato soup in a white bowl, since you’re more likely to serve yourself too much if you serve it in a red bowl.

3. Match your tablecloth to your dishware.

It turns out those individually packaged 100-calorie packs actually do the trick. A 2011 study published in Obesity found that participants ate 25.2% fewer calories when eating from 100-calorie snack packs than from larger bags of snacks. This strategy was particularly effective with overweight participants, who actually ate 54.1% less when given the 100-calorie packs.

5. Don’t eat in front of the computer or TV.

The more distracted we are, the more we eat, according to a 2007 study published in the American Journal of Clinical Nutrition. Researchers reported that participants who ate while playing Solitaire felt less full after eating than participants who ate without any distractions. The Solitaire participants also ate twice as many snacks as the non-distracted patients and had a harder time remembering what they ate. Conclusion: Get away from your desk and take that lunch break somewhere else — you deserve the break anyway.

6. Keep your food out of reach.

Convenience and visibility significantly affect how much we eat, according to a 2007 study published in the Journal of Public Health. Researchers created three testing conditions: In one, a container of chocolate candy “kisses” was placed on top of the participants’ desks; in the second, the container was placed in the participants’ desk drawer; and in the third, the container was visible but inconveniently placed on a shelf 2 meters (approximately 6.6 feet) away, forcing the participants to get up and leave the desk to get their hands on the chocolate.

On average, the participants with candies on their desk ate 2.9 more candies than those with the candy in their drawer, and ate 5.6 more than those who had to walk 2 meters to reach them. Since convenience and visibility both affected candy consumption, it would be ideal to keep your snacks out of reach and out of sight.

A 2005 study published in the British Medical Journal discovered that people poured 20% to 30% more alcohol into short, wide glasses than into tall, narrow ones of the same volume. So toss out those rocks glasses and invest in some Collins glasses.

It sounds ridiculous, but a 2011 study in the Journal of Consumer Research found that participants who used larger forks ate significantly less than the participants with smaller forks.

Never underestimate the power of imagination. You might think that thinking about eating would make you eat more, but a 2010 study published in Science reported that we actually eat less of a certain food after imagining eating it. This doesn’t work if you simply picture the food in your mind — it requires thinking about eating the specific food you’re about to eat.

This phenomenon, researchers theorized, is a result of habituation. “To some extent, merely imagining an experience is a substitute for actual experience,” said Joachim Vosgerau, one of the researchers. “The difference between imagining and experiencing may be smaller than previously assumed.”

10. Cut food up into smaller pieces.

Arizona State University’s psychology department released a study two months ago, reporting that cutting a food into smaller pieces can trick our brains into thinking we’re eating more than we are, so we eat less.

Researchers gave 301 college students an 82-gram bagel each, either uncut or cut into four pieces. After they ate as much of the bagel as they wanted, they were treated to a free lunch that served them each a measured amount of food. Students who ate the uncut bagel ate more calories — from the bagel and test meal combined — than the students who have been given the bagel in four pieces.

Next time you eat a sandwich, try cutting it into four pieces. Similarly, a cookie or candy bar can be broken into smaller pieces — an easy task with a Hershey chocolate bar that already has been molded into multiple breakable pieces.