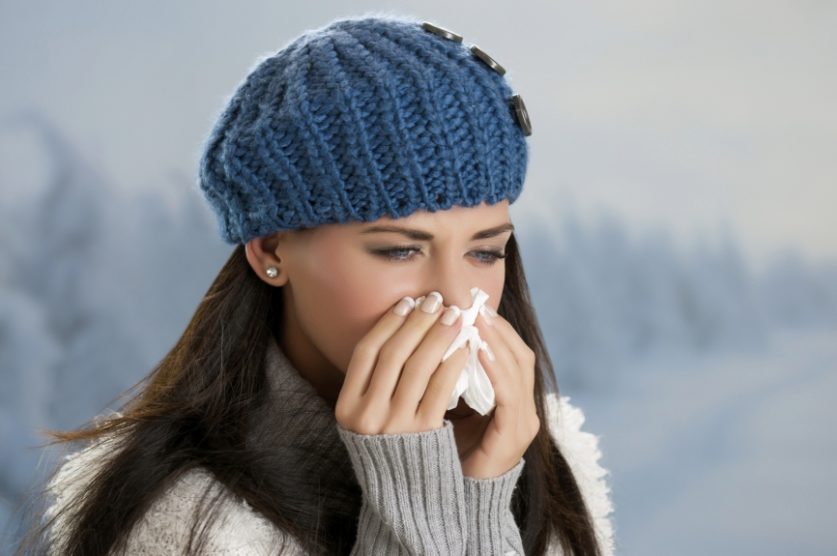 Cold season typically starts in August, with cold incidence rising until it peaks in February — so folks, your chance of catching the sniffles only goes up from here. Take precautions and follow these 16 simple steps to help reduce your risk and keep you functioning at your best.

OK, so it’s an obvious one, but it’s also a crucial one. You should be washing your hands frequently, especially during cold season and particularly after using the bathroom, blowing your nose or coughing/sneezing into your hands (which you shouldn’t do anyway — use the crook of your elbow) and touching waste (e.g., taking out the trash or changing a baby’s diaper). Always wash your hands before preparing food or eating.

And do it right! This isn’t hand “rinsing.” Use the soap and wash for AT LEAST 20 seconds.

Potentially harmful germs tend to accumulate in the areas you use the most — this includes your workspace.

“Computer keyboards, telephones, doorknobs, pens that are given to you when you sign for a credit card purchase or in a doctor’s office — all of these are surfaces that have great potential for harboring germs,” says Neil Schachter, professor of medicine at Mount Sinai School of Medicine in New York City, on WebMD.

Use antiseptic wipes to give your phone and desktop a good sanitizing. And beware of other germy places at the office — a recent study found these places harbored the most bacteria: breakroom sink faucet handles, microwave door handles, keyboards, refrigerator door handles, water fountain buttons and vending machine buttons.

The benefits of exercise are endless — and cold prevention happens to be one of them. According to WebMD, increasing your heart rate for just 20 minutes three times a week helps increase immune function. Not big on aerobics? Try taking a brisk walk five days a week — it can also lower your chance of catching a cold.

It’s important to note, however, that too much of a good thing — including exercise — can be detrimental. While moderate exercise can boost the immune system, more than 90 minutes of high-intensity endurance exercise can leave you susceptible to illness for up to 72 hours after your workout. Moderation and consistency is key!

Since we use our hands to pick up things, shake hands and do practically everything, they tend to accumulate a plethora of germs. Even if you’re washing your hands frequently, there are plenty of opportunities to re-contaminate.

You might consider it common sense to not touch your face with those hands, but one study showed that people, on average, touch their faces 3.6 times every hour. It may take some focus and self-training, but teach yourself to keep your hands away from your face. Your immune system will thank you for it.

5. Buy some Lysol for the home.

If you really want to prevent future colds, you should become BFFs with disinfectants like Lysol, which you can use to spray frequently touched areas of the home, such as keyboards, door knobs, drawer handles, light switches and remote controls.

Now there’s a preventive strategy you can really get behind! Moderate drinking — particularly red wine — has actually been linked to higher cold resistance, except in smokers (don’t smoke!).

Researchers have two theories that could possibly explain this effect: According to Rodale, alcohol could limit the replication of cold viruses or could have an anti-inflammatory effect that suppresses the production of mucus.

As always, moderation is important — heavy consumption of alcohol could have the opposite effect, suppressing the immune system.

There’s a good chance you’re not getting enough sleep — an international survey released last week found that Americans averaged six hours and 31 minutes of sleep on work nights. Guess what? Unless you get at least an hour and 29 minutes more per night, your chances of catching a cold are higher.

Studies show that people who sleep less than seven hours a night are three times more likely to come down with a cold than those who sleep eight hours or more. According to Scientific American, researchers hypothesize that lack of sleep may interfere with the immune system’s functioning, making people more susceptible to the germs that cause the common cold.

You might think that intimate contact with another person would just lead to sharing germs, and thus a higher chance of catching illnesses, but a 2009 study found this wasn’t the case. People who had sex once or twice a week had 30% higher levels of cold-fighting immunoglobulin A (IgA) than those who had sex more or less frequently.

A lowered risk of catching a cold is just one of the many reasons to eat healthily. Getting less-than-recommended amounts of essential vitamins and minerals can increase your chance of contracting a bug. Make sure you’re eating whole foods and keep your plate full of colorful foods to ensure you get a variety of fruits and vegetables.

Probiotics have been shown to work wonders on the immune system. In one study, students who consumed a daily probiotic cocktail missed half as many school days as students taking a placebo. Colds also ended two days earlier and symptoms were 34% less severe.

Researchers believe probiotic microorganisms may “soften” your immune system’s reaction to a cold by reducing the body’s inflammatory response, according to Prevention magazine. And it’s not just any probiotics: Focus on lactobacillus rhamnosus (LGG) and bifidobacterium animalis (BB-12).

Though more research is needed to confirm their effects, antioxidants could be helpful in neutralizing free radicals — the molecules that can damage your body’s cells — thus reducing your chance of catching a bug. Antioxidants may also help you bounce back from a cold faster, says WebMD.

Even if science later trashes the theory that antioxidants help you stave off colds, your body will benefit from the good foods that contain them. You’ll want to focus on foods rich in carotenoids, vitamin C and vitamin E. Some antioxidant-rich foods include tomatoes, berries, peaches, kale, plums, bell peppers and spinach.

Even if there aren’t any double-dippers in the house, the guy next to you who just moved his chip around in his hand before dipping essentially just shared all of his germs with the group. Avoid these shared foods if you want to reduce your chances of collecting someone else’s germs.

Think about all the things you touch during the day. Particles and bacteria from those things can get stuck under your fingernails, so putting those dirty nails into your mouth is just a recipe for disaster.

In fact, a 2007 study found potentially harmful bacteria lurking on the nail clippings of 24% of those taken from men. Gross. Invest in some nail clippers!

This might sound like unusual advice after we consistently stressed keeping your hands clean, but a 2004 study at Wilkes University discovered that stroking a dog for 18 minutes resulted in an increase of secretory immunoglobulin A (IgA), which helps protect the body from pesky germs. Just do yourself a favor and wash your hands afterward!

15. Get your stress under control.

Stress can take a toll on countless aspects of your health, including your immune system. While a little short-term stress might actually benefit your immune system, chronic stress increases your susceptibility to illnesses, including everything from colds to serious diseases, says WebMD.

It can also change the way your body responds to cortisol, the stress hormone that suppresses the immune system. As Sheldon Cohen, a psychology professor at Carnegie Mellon Universiy in Pittsburgh, told CNN: “Stressed people’s immune cells become less sensitive to cortisol. They’re unable to regulate the inflammatory response, and therefore, when they’re exposed to a virus, they’re more likely to develop a cold.”

Believe it or not, the simple act of laughing lowers your body’s cortisol levels and strengthens the immune system by increasing the production of antibodies, which fight bacteria, viruses and parasites.