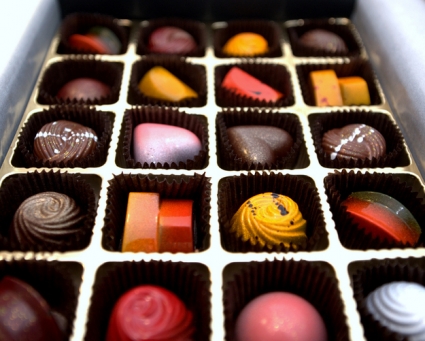 So you think you can handle no bread, huh? Fantastic. Just make sure you’re also ready to give up foods like sushi, sour cream and onion chips, and french fries. The following foods may not seem suspicious, but if you’re avoiding gluten, these probably shouldn’t be on your plate.

Don’t panic yet. Some brands are safe. But yeah, unfortunately much of what you’ll find on the shelf is made with gluten, which is used as an emulsifier or thickener.

Some contain gluten; others don’t. If it’s made with malt vinegar, which comes from barley, it’s off the table.

You can forget about ordering the California roll — the imitation crab meat contains wheat. Beware of any roll that’s drizzled with a sauce, and be suspicious about wasabi, which is sometimes prepared with wheat. Any rolls that begin with the word “spicy” are likely to contain gluten, thanks to the use of special spices.

The other reason sushi might be off the menu. Your typical soy sauce is 40% to 60% wheat.

It’s true: Gluten has even infiltrated your packaged meat options. Meatballs are often made with sauces or additives that contain gluten, and hot dog and sausage ingredient labels sometimes hide gluten under names like “modified food starch” or “natural flavors.”

That mesmerizing, revolving spindle of juicy chicken might smell divine, but there’s a chance it’s been gluten-ized. Many stores carry gluten-free rotisserie — just make sure you know what you’re buying.

Resist the temptation to burst into tears. There are plenty of gluten-free ice cream flavors out there.

Bad news for Indian-food lovers: Even some seasonings, like curry powder, contain gluten.

It’s not like anyone could have guessed the ingredients behind bendy, chewy, bright red straws, so it can’t be too much of a shocker that they include something you can’t eat: wheat flour.

These bad boys are a risk to not only your waistline but your gluten-free diet as well. The batter usually consists of wheat, and the oil they’re cooked in can contaminate the fries since it was probably also used to fry wheat-coated foods like onion rings and chicken fingers. The good news: You can still enjoy homemade fries.

Now you have a good reason to make your own. Lots of salad dressings are made with a form of gluten as a thickener.

Unless the can clearly states “gluten-free,” you’re better off avoiding baked beans, which sometimes are made with a gluten-containing thickening agent. You don’t need the sodium anyway.

There are different types of miso, but the kind that’s made from barley is now on your cannot-eat list.

If you thought potato chips were safe since potatoes are safe, think again. Because manufacturers sometimes add wheat flour to distribute the flavor onto the chips, your best bet is the plain variety. Be sure to check the label.

Your soup options are limited when you go gluten-free since wheat flour is so often used as a thickening agent. Nearly all the popular Campbell’s soups contain gluten.

The reason gravy is so thick is the reason you can’t eat most brands: white flour.

You already knew you couldn’t eat the buns, but it turns out even the veggie patties can contain wheat gluten.