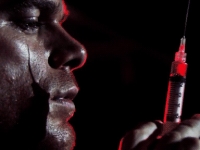 That drug that Showtime’s serial killer, Dexter, uses to knock out his victims — it’s real. So is truth serum, and a drug that causes temporary paralysis (remember Nikki and Paulo, who were mistaken for dead and buried alive in “LOST?”). But none of these chemical substances have quite the effect that Hollywood portrays.

These five drugs used in TV shows and movies exist, but their effects differ from what you see on-screen.

You know the stuff. Fictional criminals have been using it for ages, applying it to a cloth, which they then use to cover the victim’s mouth, stifling her screams and causing her to lose consciousness.

Chloroform is a colorless liquid with a mildly sweet taste and a pleasant odor. According to the Environmental Protection Agency, it was used in fire extinguishers, as a fumigant, as an anesthetic, as a spot remover for dry cleaning and as a solvent for fats, oils, greases and other products.

Can chloroform make a person pass out? Yes. But it’s not going to take a matter of seconds, and there’s a chance it will also kill the victim. As TV and film depictions suggest, chloroform depresses the central nervous system. If you’re exposed to about 100 ppm of chloroform in the air, you might feel dazed, dizzy or get a headache.

Long-term side effects of chloroform exposure include hepatitis and jaundice — due to the drug’s effects on the liver — and mood changes like depression and irritability because of its impact on the central nervous system.

If criminals used chloroform to knock out their victims in real life, they could be fighting them for up to 10 minutes before the victim loses consciousness. Additionally, too much of the drug could cause death by respiratory or cardiac arrest. Lastly, as Mental Floss pointed out, chloroform actually loses its effectiveness when it comes in contact with oxygen, so if the attacker waited too long to make his move, holding the rag while he hides in the shadows, he wouldn’t have much luck subduing his victim anyway.

Truth serum is a favorite in Hollywood and has found its way into popular TV shows and movies like “Alias,” “Heroes,” “Star Trek,” “Kill Bill Volume 2” and “Meet the Fockers.” In reality, it’s not as effective as it seems on-screen.

A drug called scopolamine was first used for truth-seeking purposes in the early 20th century. Physicians were using it to induce what’s called a “twilight sleep” — a mental state that relieves pain without causing loss of consciousness — in women giving birth. Effects included sedation, drowsiness, disorientation, incoordination and amnesia, according to the Central Intelligence Agency’s website.

After being administered the drug, women seemed to speak more candidly, comfortably offering up information without hesitation. In 1922, Texas obstetrician Robert House realized this could have another use: helping law enforcement extract the truth from suspects. Ethanol, 3-quinuclidinyl benzilate, amobarbital (aka sodium amytal) and sodium thiopental (aka sodium pentothal) have been used for similar purposes.

The U.S. Supreme Court ruled in 1963 that a confession was inadmissible if obtained while the suspect was under the influence of truth serum, but somehow it’s managed to pop back into news headlines as recently as this year. In March, Chief District Judge William Sylvester ruled that James Holmes — the suspect in last year’s mass shooting at an Aurora, Colo., movie theater — could be administered “medically appropriate” drugs during a forensic examination if he chooses to plead insanity, presumably to determine whether or not he’s faking his mental state.

While these types of drugs might cause enough disorientation for a person to accidentally blab the truth, they also have been known to produce lies. People under the influence of so-called “truth serums” often say what they think the other person wants to hear. In their confusion, it can become so difficult to properly analyze what’s being asked that people will just let their imagination loose and respond based on the interrogator’s tone and insinuations.

As io9 reported in a 2012 article, “In the end, sodium pentothal proved useless not because no one could get information, but because everyone could get too much. It gave questioners information in endless streams that were near-impossible to sort into fact and fiction.”

Research has repeatedly shown that even under the influence of these drugs, people can still lie, withhold information and exaggerate psychiatric symptoms, according to Psychology Today.

3. A DRUG THAT CAUSES TEMPORARY PARALYSIS

In addition to the “LOST” reference mentioned in the intro — which was actually caused by venomous Medusa spiders that inhabited the island — a chemically induced temporary paralysis also happened in the Bruce Willis movie “Hudson Hawk.”

In the real world, this drug is called Curare, and it was used in the 1940s through 1960s to produce anesthesia before doctors began using muscle relaxants instead. It causes paralysis by interfering with communication between the nerves and skeletal muscle.

If administered Curare, you would first experience the effects in your toes, ears and eyes, then the neck and limbs. Just like in TV and film, you would be fully awake and aware of everything happening until you lost consciousness.

The difference between reality and a situation like “LOST” — where the victims were buried alive because they were unable to speak or move — is that you’d probably be dead before anything gruesome happened to you. In “Hudson Hawk,” the characters who are given Curare were paralyzed from the neck down and were still able to breathe, speak and move their heads. In reality, the drug would have taken effect on the respiratory system as well, making breathing impossible.

Since Curare doesn’t affect smooth muscle, such as that found in the heart and intestinal tract, the heart would be fine until asphyxia set in. That said, if doctors provided artificial respiration, keeping a person alive with the help of machines, the patient would recover once the drug wore off.

Nitrous oxide, or laughing gas, played a comedic role in films like Charlie Chaplin’s “Laughing Gas” (1914) and “The Pink Panther Strikes Again” (1976), always causing irrepressible laughter in the characters that inhaled it.

Like it’s depicted, nitrous oxide is a colorless gas that is commonly used to induce anesthesia in patients for surgeries and dental work. It’s also used recreationally: In the United Kingdom — where a July 2013 study found that more than 6% of people ages 16 to 24 used the drug in 2012 — it’s called “hippy crack.”

Don’t get any ideas — it comes with its risks. In the short term, it unsurprisingly reduces mental performance, audiovisual ability and manual dexterity, according to a report from the Centers for Disease Control and Prevention. Chronic use can lead to vitamin B12 deficiency, numbness, reproductive side effects in pregnant women and asphyxiation risk, among other problems.

While nitrous oxide does produce euphoria — as well as analgesia, depersonalization, dizziness and some sound distortion — it doesn’t exactly cause laughter. It actually creates a feeling of anxiety before the sedation kicks in. Any laughter is a result of the kind of intoxication produced by the gas — kind of like how some people find themselves laughing for no reason after smoking marijuana.

M99 has recently sneaked into TV shows, being mentioned in season two of “Scandal” and making an appearance in season nine of “The Office” (when Dwight uses three etorphine darts to knock out Stanley). Perhaps most notably, though, is its role in “Dexter,” as the serial-killer protagonist administers the drug to his victims through syringes to render them unconscious.

The real drug is a semi-synthetic opioid that provides an analgesic effect that’s 1,000 to 3,000 times more powerful than morphine. For that reason, it’s legally used by veterinarians to immobilize large animals. As you can imagine, something that potent is highly dangerous to humans. In fact, every package of the drug that’s shipped to vets also comes with the human antidote, diprenorphine, in case of an emergency.

Sadly, etorphine is currently being abused in Africa by rhino hunters who are using it to knock out the animals before illegally (and gruesomely) removing their horns and leaving them to die.

Dexter would hardly need a syringe to use etorphine on his victims. One drop of the stuff on a person’s skin can cause death within minutes.

Vets don’t even use it in its pure form. They combine it with a sedative, other types of opioids and other medication that quickens etorphine’s effect and counters some of its adverse side effects, which range from hypertension and respiratory depression to tachycardia and hypoxemia (i.e., loss of oxygen in the blood).