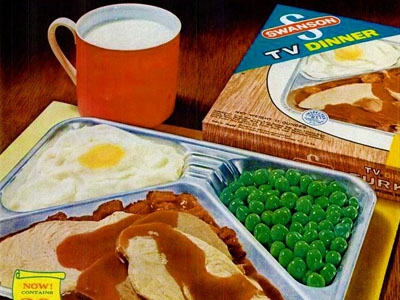 Whatever you do, don’t refer to your ice pop as a Popsicle — unless it really is one. Many of the words we frequently use today are actually brand names. Some are still trademarked; others have become accepted genericized terms.

Believe it or not, these seven food names represent, or used to represent, specific brands.

The name of this unique green vegetable — a hybrid between broccoli and gai lan (aka Chinese kale) — was trademarked by the Mann Produce Co. when it was brought to the United States in 1998. Also known as “baby broccoli,” it resembles asparagus with broccoli-like florets at the end of the stalks.

Today, the word is used generically to refer to the confectionery made of brown sugar and butter. Then, it referred to the specific Doncaster recipe: According to an 1848 newspaper article, it consisted of 1 pound of butter, 1 pound of sugar and a quarter of a pound of treacle, boiled together.

Today’s grocery stores offer an abundance of cereal and snack-bar brands made of what we all generically call granola. But in the late 1800s, granola had just come into existence — and it wasn’t called granola.

James Caleb Jackson — founder and owner of a hydropathic institute (aka water therapy spa) — invented the cereal in 1863 and named it Granula. But Dr. John Harvey Kellogg — yes, that Kellogg — allegedly stole both the concept and the name, and produced a product called Granula with slight variations on the original recipe: Oats were substituted for graham flour clusters, and he used a rolling process to flake the grain to make it more chewable. Jackson obviously wasn’t too happy about this and sued, causing Kellogg to rename his product Granola.

Whether you’re talking about your kid’s love of the jiggly snack or nostalgically remembering the gelatinous, alcohol-filled shots from your college years, you’ve probably used the word “jello” to refer to that brightly colored, sugary gelatin product — whether it was made by Jell-O or not.

Though “Jell-O” is trademarked and owned by Kraft Foods, “jello” has become a generic term for gelatin dessert.

Unless those flavored frozen treats in your freezer have “Popsicle” on the packaging, they’re called ice pops — and Unilever, which owns the trademark for the brand name, REALLY wants you to understand that. The company’s Popsicle website contains six paragraphs of instructions for how to correctly use its trademarks, which, in addition to Popsicle, include Creamsicle, Fudgsicle and Yosicle. (By the way, if you’ve been making “Popsicle” plural, cut it out. According to Unilever’s site, the plural form is “Popsicle ice pops.”)

And if you’re planning on producing a frozen snack, you might as well steer clear of using any name that ends in “sicle”: Unilever has filed oppositions against third-party trademark applications for Oransicle, Momsicle (um, ew), Smartsicle, Pupsicles, Cornsicles, Scentsicles, Whimsicle, Tropsicle, Ringsicle, Fruitsicle and Blastsicle, to name a few.

Kellogg’s faced yet another trademark issue in the early 1900s, when it had a Supreme Court showdown over the rights to shredded wheat. Invented by Henry Perky — a lawyer, businessman, railroad builder and promoter — in 1893, it was the first ready-to-eat cereal to be mass-produced and nationally distributed.

Fast forward to 1930, when the National Biscuit Co. (later Nabisco) bought Perky’s company and again sued Kellogg, leading to a U.S. Supreme Court case that sided with Kellogg. And after all that, we all consider it a generic term today. Sheesh.

Most of us now opt for the term “frozen meal” or “microwave dinner” to refer to our occasional Lean Cuisine, but the original way to describe these compartmented meals was “TV dinner” — and it’s been a registered trademark of C.A. Swanson & Sons since 1954.

Though Swanson didn’t invent the TV dinner, the company was the first to mass-market it, using the name “TV Brand Frozen Dinner.” It dropped this name in 1962, but today “TV dinner” is still considered synonymous with any prepackaged frozen meal, and many don’t realize it was ever trademarked.