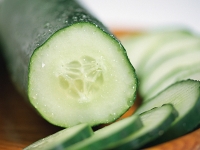 Depending on where you live and what supermarket you shop at, English cucumbers can cost you between $2 and $2.50 a pop. That’s a lot for one veggie! And for those of you who love making everything from chilled cucumber soup to cucumber-dill salad during the summer, you’ve probably wondered, “What if I just used the old-fashioned garden cuke instead of the English kind the recipe calls for?”

English cucumbers — also known as hothouse, greenhouse or seedless cucumbers — are typically longer than the regular, garden variety (about 1 foot long) and have a milder flavor. The skin is thinner and it contains smaller, less noticeable seeds. These are the cukes you see at the grocery that are wrapped tightly in plastic.

Garden cucumbers are the regular, unwrapped kind you see at the market. They’re significantly less expensive and are usually coated in a thin wax that seals in moisture and protects them from bruising. Their skin tends to be thicker, which also lends a slightly more bitter taste than the English variety, and their overall shape is shorter and rounder than English cukes.

Nutritional benefits of both

One of the reasons cucumbers are extra delicious in the summer is because they’re 90% water, which makes them delightfully refreshing on a hot day. Because of this, they’re also very low-calorie.

Cukes pack a serious amount of vitamin K and are a good source of vitamin C, potassium, magnesium, manganese and vitamin B5. Their phytonutrients — which include cucurbitacins, lignans and flavonoids — provide antioxidant, anti-inflammatory and anti-cancer benefits.

To peel or not to peel

Aside from the slight difference in flavor, people tend to choose English cucumbers over garden cukes because they want to eat the skin, which actually offers more, nutritionally, than the rest of the veggie. In fact, according to World’s Healthiest Foods, “the nutrient richness of both [the skins and the seeds] is significantly higher than the flesh.”

Cucumber skin is rich in insoluble fiber, which helps keep you regular, relieves constipation and helps keep you feeling satiated. It’s also a great source of beta-carotene, a type of vitamin A that benefits your eye health and vision.

That said, it’s not always a good idea to eat the skin. Conventionally grown garden cucumbers are often coated in a synthetic wax that can contain unwanted chemicals, and the skin can contain pesticides. Organic cucumbers are also sometimes waxed, but, to meet organic regulations, the wax must be nonsynthetic and free of many of the chemicals used in conventional farming.

If you’d rather avoid potential contaminants and pesticides, remove the skin from all conventionally grown cucumbers, whether they’re waxed or not. At the very least, scrub them well before eating. Keep the skin on the organic cukes to take advantage of its nutritional benefits.

So … English cucumbers or garden?

It really boils down to a preference in flavor and texture. Many prefer the English cukes because of the milder flavor and thinner skin. However, if the thicker skin and the slightly bitter taste of the garden cukes don’t bother you, dig in and save your money.