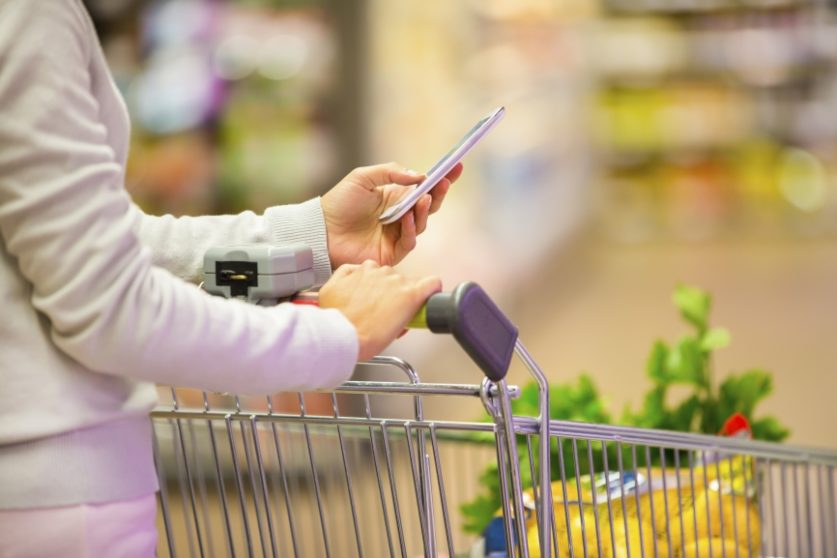 Your trip to the grocery determines your eating habits for the week. Don’t set yourself up for failure. Follow these do’s and don’ts to make sure you make the right choices and bring home good-for-you foods.

Avoid the middle of the store.

Yes, you’ve probably heard this one before. And while we don’t think you should avoid it completely, it is a good idea to spend the majority of your shopping time in the perimeter — which offers produce, meat, dairy and frozen items — rather than the inner aisles, where most of the packaged foods reside.

Keep in mind, however, that many supermarkets have started littering the perimeter with desserts and high-calorie prepared foods, so look out for those. And the inner aisles of the supermarket do offer some healthful foods, such as dry beans and whole-grain starches.

Or use your smartphone if it has a built-in calculator. Sometimes food-purchasing decisions require a little math. This way, you won’t get frustrated and inaccurately estimate which of the two cereals with different servings sizes contains the least sugar.

Shop after your workout.

You’re feeling good about exercising and staying committed to your health goals, so it’s a good time to shop for food and continue making healthy choices while you’re in that mindset.

The shorter, the better. Many processed foods are packed with additives and chemicals you can’t even pronounce. Food author and activist Michael Pollan goes so far as to say you should avoid packaged foods with more than five ingredients.

Sure, this sounds like common sense, but we’re willing to bet it hasn’t been long since you last made this mistake. There are even studies proving we make bad choices in the grocery aisles when we’re feeling ravenous. Just don’t do it.

Buy something just because there’s a deal.

“Oh, look! There’s a two-for-one deal on those baked potato chips!” Repeat after us: “I do not need them.” If they’re in the house, you will eat them. It’s smart to buy in bulk when the food is healthy and nonperishable, but stocking up on packaged snack food isn’t going to help your diet.

Food labels can be deceptive. Sure, the product might be low in fat, but food manufacturers often make up for the lack of fat with salt. Always read the Nutrition Facts label and the ingredient list to get the full story.

Not everybody can afford to purchase all fresh food and make sure it gets eaten before it spoils. And sometimes we need the convenience that comes with packaged food. But if you’re considering buying those cans of veggies, turn yourself around and head to the frozen food aisle where the produce won’t be so loaded with sodium.

Buy it if it contains trans fats.

This man-made fat has been linked to too many health conditions, including heart disease and diabetes. Research also shows that trans fats increase LDL cholesterol levels, according to WebMD. Even if it says it contains only 1 gram of trans fat, put it back on the shelf.

This is just as crucial as going to the grocery on a full stomach. Create a list before you go and stick to it. Your waistline, and wallet, will thank you.