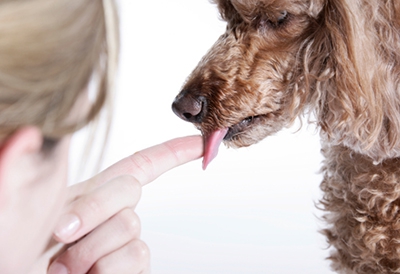 The belief that human wounds can heal faster when licked by dogs dates all the way back to ancient Egypt, when dogs were used in healing practices. The Egyptians believed that being licked by a dog, especially on an open wound, would aid in recovery or even cure the disease causing the illness. Today, it isn’t unusual to hear a dog lover make a similar claim. The little research available today on the this subject suggests that dog saliva may have antimicrobial properties, but your pooch’s tongue also carries plenty of bad bacteria. (I mean, really, there’s a reason Fido’s breath smells like that.) Dog saliva contains three things that scientists have theorized are linked to its ability to heal:

The movement of a dog lick could also play a role in healing wounds. According to Psychology Today, “the saliva of a dog’s tongue acts to loosen any debris that may be on the surface of the wound. Any dirt or other debris will also become attached to the moisture of the saliva, thus at the very least, the area of the wound will be cleansed.”

Why dog saliva is not a good idea

Just because your dog’s saliva may have some potential benefits doesn’t mean it comes without risks. For example, cats’ and dogs’ mouths contain a bacteria called Pasteurella that could cause a skin infection called cellulitis in humans if transmitted onto a wound. Dr. Scott Weese of the Veterinary College’s Centre for Public Health and Zoonoses explains on the Worms and Germs blog: “The oral cavity of the dog contains billions of bacteria from hundreds of different bacterial species. Many of these are able to cause infection given the right circumstances.” Such circumstances tragically arose for a 32-year-old woman in Decatur, Ga., and a 48-year-old woman from Texas within the past year. Both women were infected with capnocytophaga canimorsus, a bacteria found in the mouths of cats and dogs, after one was bitten by a dog and the other was believed to have contracted it in some way from her 1-year-old pup. Both had their legs amputated after the infection spread, and at least one lost her battle against it. While this bacteria is usually harmless to healthy humans, it can be dangerous and even deadly in those with certain pre-existing conditions. If dogs’ saliva was a safe and effective way to treat a cut, it probably would have been bottled up by some big pharmaceutical company by now. Stick with good old-fashioned soap and water to disinfect your wounds, and keep them clear of Fido’s mouth. Healing properties or not, it’s not worth the risk of contamination by all the other stuff that’s hanging out on his tongue.