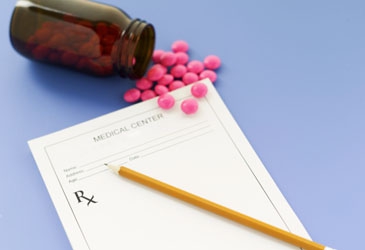 When we think of drug abuse, illegal drugs such as cocaine, meth and heroin usually come to mind. But the truth is that the psychotherapeutic drugs handed to us by our friendly pharmacist are used recreationally more often than any other illegal drug (with the exception of marijuana and hashish).

In 2010, about 2.7% of Americans were using psychotherapeutic drugs for reasons that did not involve their doctors telling them to do so. Pain relievers alone were actually abused more than cocaine, hallucinogens, ecstasy, meth, crack or heroin from 2002 to 2004.

These scary statistics indicate our country has a dangerous problem when it comes to prescription medication. So in support of National Medicine Abuse Awareness Month, we thought we’d provide some insight on the four medications most frequently targeted by abusers.

House M.D.’s drug of choice, opioid analgesics like OxyContin and Vicodin are prescribed to treat pain and easily make the No. 1 spot on the list of most frequently abused prescription medications.

How they work: Opioid analgesics mess with your pain signals used by the nervous system and brain to communicate with each other. This suppresses people’s perception of pain and almost literally “calms your nerves.”

Potential health consequences:
Here’s why opioid abuse should be taken seriously: In 2008, more than 12,000 people died from an unintentional overdose of an opioid analgesic; this compares with approximately 4,500 deaths from cocaine and about 3,000 deaths from heroin. This shocking mortality rate hasn’t always been so high; it’s quadrupled since 1999.

In addition to death, users could face these possible health consequences: slowed or arrested breathing, lowered pulse and blood pressure, tolerance (i.e., needing an increasingly higher dosage to get the same effect), addiction, unconsciousness and coma.

Prevalence:
A shocking 2 million Americans are addicted to opioids, according to the “2005 National Survey on Drug Use and Health” — and that’s just the statistic for people who can’t stop taking the drug recreationally. The number jumps to about 5.1 million if you’re wondering how many people abuse it each year.

Adults aren’t the only ones getting high. According to the National Institute on Drug Abuse, about 8% of 12th-graders experimented with Vicadin, and 4% took OxyContin recreationally in 2011. Among high school seniors, nearly one in 12 admitted to using Vicodin for nonmedical reasons, and 1 in 20 reported abusing OxyContin.

And it’s no surprise kids are getting their hands on these medicines. Hydrocodone/acetaminophen, the generic name for Vicodin, was the No. 1 most prescribed drug — and we mean out of ALL drugs, not just psychoactive ones — in 2011, with 136 million prescriptions, according to IMS Health.

The second most prescribed medicine, simvastatin — used to treat high cholesterol — didn’t even come close to that number, with only 96.6 million drugs dispensed. Just think of all the Vicodin-stocked medicine cabinets and drawers kids could be reaching into to acquire these drugs.

Sure enough, when the aforementioned 12th-graders were asked how they obtained Vicodin and OxyContin, 70% of them reported that friends or relatives had provided them with the drugs. And if you’re thinking the Internet must be to blame, think again: The study reported a negligible number of adolescents claiming they got the drug online.

Nope — tranquilizers aren’t just used to put dangerous animals to sleep in the movies. They’re actually the second most commonly abused type of prescription drug. According to DrugFree.org, benzodiazepines are considered prescription tranquilizers, while barbiturates are labeled prescription sedatives.

There are two types of tranquilizers: benzodiazepines and sedative-hypnotics (aka “sleeping pills”):

How they work: Benzodiazepines increase the efficiency of the neurotransmitter GABA, which decreases the excitability of neurons and slows down such responses as respiration, heart rate and cognitive functions.

How they work: Like benzodiazepines, these drugs also affect the GABA neurotransmitter in order to depress the central nervous system

Prevalence:
According to 2002-2004 data, tranquilizers were abused more frequently than hallucinogens, stimulants, ecstasy, methamphetamine, crack, OxyContin, sedatives, LSD or heroine. Slightly more than 5% of 12th-graders reported recreational use of tranquilizers in 2011.

If you went to college in the past decade, you’re probably aware of stimulant abuse. Right around exam time, it’s not unusual to see college kids popping pills to stay awake and focused on studying. These pills are known as psychostimulants, and they account for the third most frequently abused type of prescription medication.

Purpose: To treat narcolepsy and attention-deficit hyperactivity disorder, as well as a short-term treatment for obesity

How they work: Varies by drug, but usually involves interfering with norepinephrine and/or dopamine activity, or affecting adenosine or nicotinic acetylcholine receptors

Prevalence:
About 6% of 12th-graders took Adderall for nonmedical purposes in 2011; another 3% abused Ritalin. And remember what we said about college use of the drug? The “National Survey on Drug Use and Health” discovered that full-time college students ages 18 to 22 were twice as likely as those not enrolled full time in college to have used Adderall for nonmedical reasons in 2006 and 2007.

It’s not just kids either. There’s been a disturbing 750% increase in Adderall prescriptions for women between the ages of 26 and 39, and it’s reportedly being abused by moms to help manage their many responsibilities.

The fourth most frequently abused drug type, sedatives (i.e., barbiturates) are less common than the drugs usually categorized as tranquilizers these days. They’ve taken a back seat in the depressant family to benzodiazepines, which are considered safer and less dangerous in overdose.

How they work: Like benzodiazepines and sedative-hypnotics, barbiturates interfere with the activity of the GABA neurotransmitter, depressing the central nervous system

Prevalence: Between 3% and 4% of 12th-graders took sedatives for nonmedical purposes in 2011. Sedative abuse is most common in white, non-Hispanic people, and is more common in women than men.

If you or someone you know has a drug abuse problem, click here for more information on the signs, symptoms and treatment.