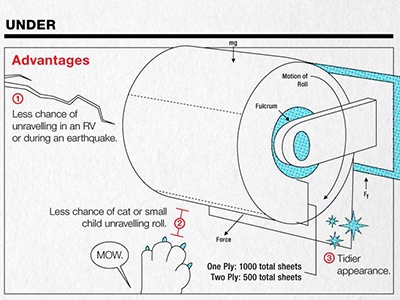 If you thought foreign affairs was a divisive topic among Americans, just check out Wikipedia’s discussion page for the article on toilet paper orientation — it’s two times longer than the one for the Iraq War.

As this infographic from EngineeringDegree.net states, “TP orientation is a matter of identity, lifestyle and passion” for many people. Some prefer the toilet paper hang over the roll; others insist on an “under” orientation.

Twenty percent of us are so neurotic about the issue that we will defiantly flip the roll around if another member of the household dares to hang it “incorrectly.” Interestingly, this pet peeve is more common in men than women.

If you’re an “over” advocate, you’ll be happy to learn you’re part of the majority, and, to be frank, the advantages illustrated in this infographic definitely outweigh those of the “under” orientation. You might have a higher chance of your TP unraveling in an RV or during an earthquake, but at least you won’t have to worry about this: