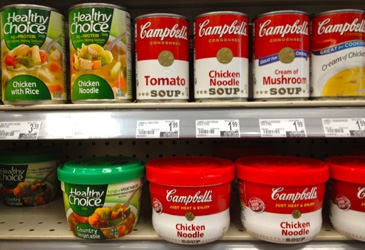 The lesson we learned this week: The sodium in frozen meals is nothing compared with the outrageous amount in soup. While some of these brands may be low in calories and fat, it’s more than likely that their sodium content is off the charts.  So here we now have our list of low sodium soup recipes.

And here’s hoping you don’t typically consume a whole can of Campbell’s, because a can of Campbell’s soup contains between 700 mg and 900 mg of sodium per serving — but there are two to two-and-a-half servings per can.

As we noted a couple of weeks ago in our infographic depicting the sodium in frozen meals, too much salt can lead to high blood pressure, a condition that affects about one in three Americans, according to the Centers for Disease Control and Prevention. Those with high blood pressure, also known as hypertension, are at a significantly higher risk for heart disease, stroke and heart failure, among other conditions.

Sodium is naturally present in some foods, but it’s also used in processed foods to prevent the growth of bacteria, bind ingredients, enhance color and give food a firmer texture, according to the American Heart Association.

Our body requires about 180 mg to 500 mg of sodium a day in order to maintain the right balance of fluids in the body, transmit nerve impulses and maintain muscle function. The recommended daily sodium level is 1,500 mg, with 2,300 mg being the very highest amount we should consume in a day. For a low-sodium label, the Food and Drug Administration requires food products to have no more than 140 mg of sodium per serving. A product’s packaging can’t claim it’s “healthy” if it exceeds 480 mg of sodium per reference amount.

It’s important to note in this chart that we’ve included both the sodium per serving and the total sodium in the container. If you typically consume the full container’s worth of soup, then you should check the sodium content in the far right column. But if you usually follow the serving sizes on the Nutrition Facts label, then you should be looking at the second column. We chose to rank the brands by highest sodium per serving rather than total sodium since the manufacturer intended the soup to be eaten according to serving size.

We were impressed with the brand Health Valley Organic, which didn’t add any salt to its soups and took the Nos. 1 through 4 spots for both lowest sodium per serving and total sodium. Overall, we found that the easiest way to buy canned soup and ensure your sodium intake doesn’t reach insane levels was to purchase the ones marked “light in sodium” or “40% less sodium.”

We know it’s slightly unrelated, but if you are a DIYer and want to remove deadskin from your feet, you should check out our listerine foot soak article.  We think the results will shock you.