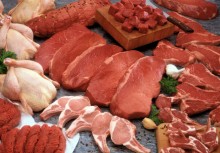 Beef brisket might be fingerlickin’ good, but a mere 3 ounces packs 300 calories, 24 grams of fat and less protein than most other cuts. With all the different cuts of meat, it can be overwhelming to choose what to cook for dinner while still adhering to a well-balanced diet. This infographic simplifies it, listing the various cuts of chicken, turkey, beef, veal, pork and lamb from highest amount of calories to lowest, and including the total grams of fat and protein as well.

A healthy serving size of various cuts of meat is generally considered to be 3 to 4 ounces, since we shouldn’t be consuming more than 6 ounces of meat per day, according to the American Heart Association and the U.S. Department of Agriculture’s Food Pyramid. An easy way to remember how much is enough: A 3-ounce serving of meat should be about the size of a deck of cards.

Print out this infographic and carry it with you to the grocery to help you choose wisely.