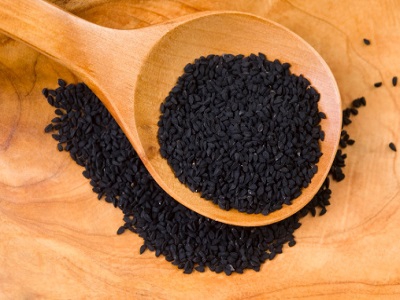 A cursory look at some of the posts about the benefits of black seed — the seeds of the flowering Nigella Savita plant — making the rounds on social media might be enough to get you on board its cure-all train. When ingested, these seeds — lauded by some as “blessed seeds” — can allegedly sort out a diabetic’s pancreas, protect the liver and kidneys and, of course, help prevent cancer. Apparently, it’s even used by women as birth control. Sound too good to be true? Let’s take a closer look.

What is black seed oil?

Black seed goes by many names, including black cumin, black caraway and fennel flower, and it is used as a seasoning spice because of its nutty flavor. But it’s also been used in herbal medicine for a very long time. According to Green Med Info, black seed was used by the ancient Egyptians. Some of its proponents claim that it heals cancer, diabetes, muscular dystrophy, and skin and stomach disorders.

Take a look at WebMD, though, which lists all the ailments for which black seed is taken. The site even acknowledges that some scientific evidence does suggest that the black seed benefits might help boost the immune system or even fight cancer, but it reminds people that not enough tests have been conducted in humans to draw definitive conclusions. Now, before you lose your cool and go on about conspiracies and no one wants to find the cure for cancer because [insert reason here], we aren’t saying black seed doesn’t help prevent cancer or inhibit tumor growth.

Simply put, more research is necessary to back up some of these really hefty claims. In the meantime, though, black seed is an antioxidant and has anti-inflammatory properties that, when taken responsibly, are still beneficial to your health. At the very least, it can help better your odds.

Say you do get cancer, which, you know, hopefully not. But say you do. If you’ve made it a point of eating a healthy, balanced diet, your body will be that much stronger and better equipped to handle the effects of the disease and its treatment. WebMD states that “black seed, when used in small quantities, such as a flavoring for foods, appears to be safe for most people.” Consider seasoning food with it, rather than popping a bunch of supplements.

Warnings and side effects of black seed oil

Let’s go back to that whole women-use-it-as-contraception thing. The consensus seems to be that not enough data exists to suggest that black seed can help prevent pregnancy. But don’t throw your birth control pills out just yet (and use condoms!). One of its side effects is that it can slow or fully stop uterine contractions. So women who are pregnant or nursing should not take medicinal amounts ever, and women who suffer from menstrual cramps should consider suspending use in the days leading to and during their periods. Let’s just say, more evidence is needed, but … ouch.

Other side effects, according to an article on LiveStrong.com, include contact dermatitis and hypotension. Now here is why we need to be careful when we hear about these cure-alls, which aren’t necessarily catch-alls. Our bodies are all different, and the way you react to something, even something that is good for you, does not mean that someone else will react the same way.

For starters, we all have different medical histories. There are simply too many variables. So even though black seed might effectively treat someone’s skin disorders, when handled by someone who is allergic to it, it may cause a skin rash on contact. Go figure. And even though it’s anti-inflammatory properties make it ideal for lowering blood pressure — good news for those with hypertension — there is a chance that it will lower it too much, and that’s life-threatening.

The caveat, therefore, is to talk to your doctor. See how you can safely take black seed and for which issues. Make sure you list everything you take, from over-the-counter pain medicine like ibuprofen to other herbal supplements to prescription medication, to ensure there are no adverse drug interactions that will end up offsetting the supposed black seed oil benefits taking black seed offers.