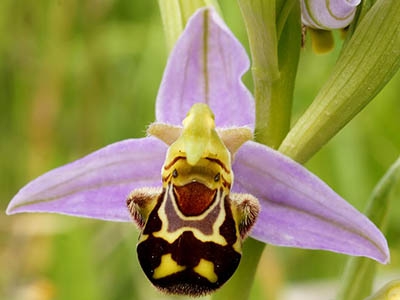 Even the most common varieties of orchids are prized for their unique shapes and colors, but the phalaenopsis orchid family also includes some seriously wacky-looking species. Here are 13 of the most unusual varieties.

Also known as the monkey orchid or monkey face orchid, this bizarre flower bears an uncanny resemblance to a baboon’s face. A rare species, the Dracula simia is found in the cloud forests of southeastern Ecuador and Peru.

An endangered genus, the Drakaea orchid is often referred to as the “hammer orchid” for its unique shape and movement.

Also called the white egret orchid, the Habenaria radiata is known for its beautiful white petals that spread to the sides like wings on a bird. It’s the official flower of Setagaya ward, Tokyo, and can be found in China, Japan, Korea and Russia.

The Ophrys insectifera, or “fly orchid,” can be found all over Europe and gets its nickname for not only its appearance but also the fact that it is completely dependent on flies and bees for pollination.

There’s no question where the Orchis italica’s nickname, “naked man orchid,” came from. This species blooms in the spring and summer in the Mediterranean.

Known as the “lady slipper orchid,” this subfamily of orchids is distinguished by slipper-shaped pouches, which trap insects so they’re forced to climb up the flower and fertilize it.

The national flower of Panama, the beautiful Peristeria elata is also called the “dove orchid” or the “Holy Ghost orchid” due to its resemblance of a dove perched in its nest. The species is threatened with extinction because of over-collection.

The “moth orchid” might be nicknamed for its supposed resemblance to a moth in flight, but it looks like a bird’s head to us. This genus is comprised of about 60 species and can be found in southeast Asia, the Philippines and northern Australia.

This funky-looking flower is known as the “butterfly orchid” and is native to Central America.

Another bird-like orchid, the Caleana major is known as the “flying duck orchid” and is native to eastern and southern Australia.

Also known as the “mirror orchid,” this species has a distinctive glossy blue lip that’s outlined by reddish brown hairs. It grows in the Mediterranean and is pollinated exclusively by a single species of wasp.

Meet the “bee orchid.” Named for its similar shape and color to bees, the ophrys apifera is self-pollinated in every area but the Mediterranean, where it attracts insects by producing a scent that resembles that of a female bee.