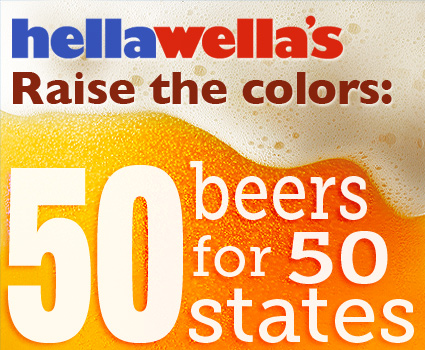 As Americans, we’re loyal to our country — and our beers.

Every state has its own celebrated brew that residents love to brag about and belligerently claim is better than someone else’s state beer. Honestly, it could be argued that more Americans could identify their unofficial state beers than recall their state’s official nickname, flower or bird. (Name all three and tell us we’re wrong.)

So salute the red, white and blue by (responsibly!) indulging in a pint of your hometown’s favorite brewski — after all, moderate beer intake can be beneficial to your health. To learn more about its health benefits.

While you’re at it, check out our Beeramid infographic to find out the calories, carbohydrates and alcohol percentages of 55 of the most popular brews out there.

Tell us: What beers did we miss? Share your favorite U.S. beer in the comments and why it should have represented a certain state.

Raise the colors: 50 beers for 50 states

Diamond Bear Brewing Co. — Diamond Bear Pale AleYear founded: 2000 Headquarters: Scottsdale, Ariz. Type of beer: Classic English Pale Ale Fun fact: Diamond Bear gets its name from the fact that Arkansas is the only state in which diamonds are mined, and Arkansas used to be known as the Bear State.

New Belgium Brewing — Fat Tire Amber AleYear founded: 1991 Headquarters: Fort Collins, Colo. Type of beer: Amber ale Fun fact: Jeff Lebesch, founder of New Belgium, started brewing in his basement, with his first two creations being a brown dubbel called Abbey and an amber called Fat Tire, which was named for the fat tires on his bike that he rode around European villages.

DC Brau — The PublicYear founded: 2011 Headquarters: Washington, D.C. Type of beer: American pale ale Fun fact: DC Brau is committed to producing its beer in the most eco-friendly way possible. The brewery delivers its waste to Burnside Farms in Haymarket, Va., where it’s used for composting and fertilization. All of the beers are packaged in 100% recyclable aluminum cans.

Cigar City Brewing — Jai Alai India Pale AleYear founded: 2008 Headquarters: Tampa, Fla. Type of beer: India Pale Ale Fun fact: Jai Alai is a sport from the Basque area of Spain that involves bouncing a ball off a wall at speeds of up to 188 miles per hour.

SweetWater Brewing Co. — 420 Extra Pale AleYear founded: 1997 Headquarters: Atlanta Type of beer: West Coast-style pale ale Fun fact: The brewery was named after Sweetwater Creek, a body of water near the brewery where one of the founders went kayaking. The brewery’s motto is “Don’t float the mainstream.”

Madhouse Brewing Co. — Pastime Pale AleYear founded: 2010 Headquarters: Newton, Iowa Type of beer: “A hopped up version of an American-style pale ale,” according to the Madhouse Brewing website Fun fact: One of the founders, winemaker Mason Groben, had to get a law changed in order to establish the brewery; until he campaigned for the legislation to be changed, Iowa law forbade an employee of a winery from also working for another manufacturer of alcoholic beverages, which would have prevented him from being involved with Madhouse Brewing.

Abita Brewing Co. — Purple HazeYear founded: 1986 Headquarters: Abita Springs, La. Type of beer: Lager brewed with raspberries Fun fact: Abita Brewery prides itself on its use of water drawn from a deep artesian well in the Southern Hills aquifer system; the company says its water has been tested and has been shown to be free of man-made pollutants that most other breweries have to filter out.

Allagash Brewing Co. — Allagash WhiteYear founded: 1994 Headquarters: Portland, Maine Type of beer: Belgian-style wheat ale Fun fact: All Allagash beers are made using the Belgian tradition of bottle conditioning, which means that a fresh dose of yeast and sugar is added just before bottling and the beer then goes into a new process of fermentation inside the bottle that adds a natural carbonation.

Surly Brewing Co. — Furious Year founded: 2005 Headquarters: Brooklyn Center, Minn. Type of beer: American-style India Pale Ale Fun fact: State liquor laws had to be changed for the brewery to be established, and the piece of proposed legislation that allowed brewers to sell pints of their own beer in the state of Minnesota was known as the “Surly Bill.” It was passed in 2011.

Smuttynose Brewing Co. — Finestkind IPAYear founded: 1994 Headquarters: Portsmouth, N.H. Type of beer: American-style India Pale Ale Fun fact: The company is named after Smuttynose Island, the third largest of the nine islands that make up the Isles of Shoals. According to the website, “The name appears on nautical charts going back as far as the 17th century, so its true origins are lost to time.” The website also cheerily adds, “Prior to the arrival of Smuttynose Brewing, the island was best known for a brutal double axe murder that occurred there in 1873.”

Flying Fish Brewing Co. — Exit 4Year founded: Founded in 1995; opened in 1996 Headquarters: Cherry Hill, N.J. Type of beer: Belgian-style Trippel Fun fact: Flying Fish was founded on the Web — the company’s website allowed beer lovers to help build the brewery by selecting and naming beers, designing T-shirts and labels, volunteering to be taste-testers and even applying for jobs as brewers.

Great Lakes Brewing Co. — Burning River Pale AleYear founded: 1988 Headquarters: Cleveland Type of beer: American pale ale Fun fact: Burning River Pale Ale was named after the fires (there were at least 13) on the Cuyahoga River, which was at one time one of the most polluted rivers in the United States.

Rogue Ales — Dead Guy AleYear founded: 1988 Headquarters: Newport, Ore. Type of beer: German maibock-style ale Fun fact: The Newport brewery was sold to founder Jack Joyce at a generous price under two conditions: that a picture of the seller — Mohave Niemi, founder of the famous Mo’s Clam Chowder — naked in a bathtub be displayed at the pub forever, and that the brewery give back to the local community. According to the Rogue Ales website, the picture is still there, on the wall to the left of the bar.

D.G. Yuengling & Son — Yuengling Traditional LagerYear founded: 1829 Headquarters: Pottsville, Pa. Type of beer: American lager Fun fact: In 1920, Yuengling opened a dairy directly across from the brewery in order to survive the Prohibition; when Prohibition ended in 1933, the company shipped a truckload of its beer to President Franklin D. Roosevelt.

Narragansett Brewing Co. — Narragansett LagerYear founded: Founded in 1888, and the first beer was produced in 1890; it closed in 1981 and was re-established in 2005. Headquarters: Cranston, R.I. Type of beer: Classic American lager Fun fact: At one time, the Narragansett brewery property held a barn, stable, blacksmith, 75 horses, 45 wagons, gas-powered trucks, electric trucks, 25 refrigerated train cars and its own ice plant.

Ghost River — Golden AleYear founded: 2008 Headquarters: Memphis, Tenn. Type of beer: Ale Fun fact: Ghost River Brewing — which says on its website that “great water makes great beer” — donates some of the proceeds of every barrel sold to the Wolf River Conservancy, a nonprofit dedicated to conserving the Wolf River and its watershed.

Magic Hat Brewing Co. — Magic Hat #9Year founded: 1994 Headquarters: South Burlington, Vt. Type of beer: “Not quite pale ale,” according to the company’s website Fun fact: One of the founders, Bob Johnson, first started making beer in a bathtub at Goddard College in 1978.

New Glarus Brewing Co. — Spotted CowYear founded: 1993 Headquarters: New Glarus, Wis. Type of beer: Naturally cloudy, cask-conditioned farmhouse ale Fun fact: You can only get New Glarus beers in Wisconsin. The website says: “There are only so many hours in the day to make beer, and we can only keep up with the local demand.”