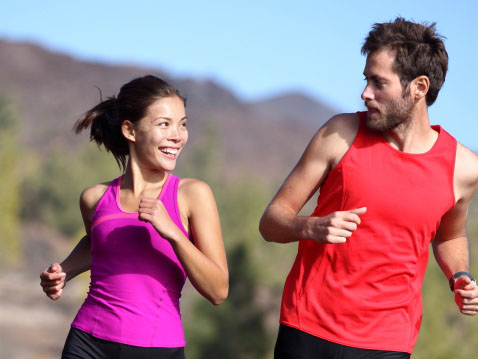 Whether you’re one of them or just see them flash by you during your morning commute; runners are an intriguing folk. What are they up to? According to a new survey by Brooks Running Co., 66% of runners believe they have more sex when they run with their significant other. No wonder so many people hit the pavement. Want to learn more? Here are more results from “The Brooks Run Happy Nation Report,” giving us an inside look at runner relationships, traveling and their pet peeves.

Guys surprisingly are more chatty on a run than their female counterparts. More than three-quarters (76%) of the men surveyed passed the miles by discussing their teams latest victory (sports, 51%) or their cool new gadget (34%). Ladies, on the other hand, choose to use their running time as therapy — they are most likely to talk about relationships (47%), both the good and the bad. Surprisingly, all runners ranked their happenings in the bedroom as their least favorite running topic.

When it comes to a favorite running partner, Jimmy Fallon (27%) steals the spotlight, with Chelsea Handler (22%) and Jimmy Kimmel close behind (22%).

Runners do it better

Everyone knows running is good for the body, but how does it affect personal connections?

Distance matters. The longer you run, the better your sex life, the survey found, as nearly half (49%) of couples who run six or more miles together claim it pays dividends in the bedroom.

Overall, 69% believe their sex life is affected, for better or worse, by running together as a couple, and when running with friends, both men and women talk equally about knocking boots (21%).

Runners from the West (42%) are most likely to claim that running increases their time spent rolling in the hay versus the South (38%), Northeast (33%) and Midwest (32%).

Being away from home doesn’t mean taking a break from running.

If the running shoe fits: 67% have left something out of their suitcase to fit in their running shoes, with an extra pair of shoes (30%), an extra outfit (26%) and a blow dryer (21%) topping the list of omitted items.

Nearly three out of four (74%) runners who hit the pavement one to five times a week at home keep up their running routine when on the road.

Runners are plugged in

For a large majority of runners, plugging into tracks helps keep them on track.

Those who can’t find the perfect running buddy shouldn’t despair; there’s always an audio download to keep company. Eighty-seven percent of runners like to listen to something to keep them motivated, whether a rump shaker playlist (music, 78%), audiobooks (11%), even meditations (10%) or motivational speakers (9%). Just 13% feel that silence is indeed golden and choose no audio companion.

The survey found that honking drivers, traffic lights and speeding bicyclists are among the top pet peeves that runners encounter.

Difficulty dressing for the weather is a bigger pet peeve for females (30%) than males (17.3%).

Runners are torn about the worst type of runner they encounter on their favorite trail or running spot:

The “Brooks Run Happy Nation Report” was conducted by Wakefield Research among 1,000 U.S. adults ages 18 and older who run at least once per week, between Feb. 22 and Feb. 28, 2013, using an email invitation and an online survey. The margin of error for this survey is 3.1 percentage points.