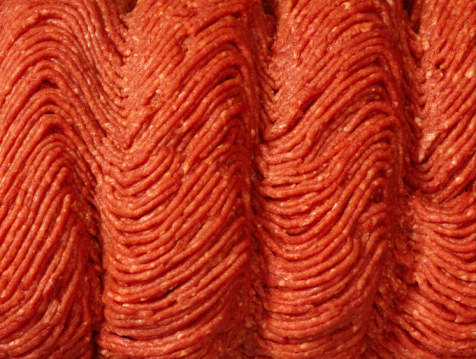 Last year it was arsenic in apple juice. This year, the ammonia-treated “pink slime” has everyone in a panic. But if we probe further than our emotions and the superficial fact that it simply sounds gross, is there really an underlying safety issue?

“Pink slime” — a term coined in 2002 by former U.S. Department of Agriculture microbiologist Gerald Zirnstein, who quit his job with the governmental agency out of disgust for the product — consists of the spare bits of unusable meat, like connective tissue, that’s scraped off the carcass after the profitable cuts are removed. After being treated with ammonium hydroxide (a combination of ammonia and water), flash frozen and compressed to kill bacteria, the sludge is added as a filler to what an “ABC World News” report this week revealed was about 70% of the ground beef sold in supermarkets.

Ammonium hydroxide was classified as generally recognized as safe (GRAS) by the FDA in 1974, and the pink slime was approved for use as a food safety agent in 2001, when an entrepreneurial company called Beef Products Inc. started using it because of its low cost. The meat trimmings used in the process are more susceptible to bacteria, so it’s treated with ammonium hydroxide in order to ensure it’s decontaminated.

As Keith Nunes explained in Meat Poultry magazine, “ammonium hydroxide is naturally found in proteins such as beef, pork and chicken. What the Beef Products process does is increase the amount of ammonium hydroxide in the lean beef to elevate its overall pH and make the product inhospitable to the survival of pathogens, such as E. coli and salmonella.”

Slime hit the fan, though, last April when famous British chef, restaurateur and TV personality Jamie Oliver showed viewers of his TV show, “Jamie Oliver’s Food Revolution,” how the process worked and informed them that the hamburgers, meatballs and meatloaf we eat contain up to 15% of this product. The uproar following the episode led fast food companies like McDonald’s, Taco Bell and Burger King to remove what the industry calls “lean, finely texture beef” from its food.

Contrary to your Facebook post,
this photo is not of pink slime.
Despite the fast food industry bowing to consumer concerns, the pink slime controversy continued earlier this year when a photo labeled as “pink slime” went viral. As it turns out, this photo does not depict the product known as pink slime.

According to the Washington Post, it’s the creamy pink paste formed through a process called advanced meat recovery, which mechanically separates the extra scraps of chicken from the bone. The paste is used in chicken nuggets, which Jamie Oliver also showed on one of his “Food Revolution” episodes in 2010. While its appearance is far from appetizing, there does appear to be a difference.

The paste appears much more finely processed than the slime, which you can see here. Based on a USDA document, it sounds like the difference lies in the machinery used to process the products: “Beef that is mechanically separated from bone with automatic deboning systems, advanced lean (meat) recovery (AMR) systems or powered knives, will not be allowed.”

Why it’s back in the news
This week’s televised ABC report put pink slime in the headlines yet again when Zirnstein — the USDA scientist who has been publicly protesting the processed meat since at least 2009, when the New York Times investigated it — informed ABC’s Jim Avila that the slime is in about 70% of America’s ground beef and is ending up in our kids’ school lunches. “I do not consider the stuff to be ground beef, and I consider allowing it in ground beef to be a form of fraudulent labeling,” he told NYT.

What defenders say
The USDA has brushed off all of this contention, stating that the slime is completely safe and that the agency actually plans on buying 7 million pounds of slime-containing ground beef over the next few months for the national school lunch program.

The American Meat Institute, unsurprisingly, also defends the filler, saying that not only is it safe and edible, but it’s also sustainable because the meat used for it would be otherwise wasted. “The beef industry is proud to efficiently produce as much lean meat as possible from the cattle we raise,” said AMI in a statement. “It’s the right thing to do, and it ensures that our products remain as affordable as we can make them while helping to feed America and the world.”

Chuck Jolley — president of Jolley & Associates, a marketing and public relations firm that concentrates on the food industry — wrote an op-ed about the pink slime controversy for Food Safety News titled “Manipulated public opinion trumps real science – again.” “Making sure our food supply is as safe as possible requires the use of some sophisticated science,” he argued. “And emotional reactions by people who speak before they understand the process will delay acceptance at best.”

Like pink slime, using ammonium hydroxide in food isn’t anything new.
Both ammonia and ammonium hydroxide are natural compounds found in the environment and are even produced by our bodies. Since its approval in 2001, ammonium hydroxide been used as a leavening agent, as well as a way to control a food’s pH level, in various food products. It’s not just in ground beef; it’s also in grains, baked goods, condiments, sweets, cheeses and even drinking water.

But isn’t ammonia that stuff in my cleaning products? Isn’t that toxic?
Upon hearing “ammonia,” almost everyone immediately thinks of the potent, toxic cleaning products they have in their homes. Yes, it’s the same ingredient, but the level of ammonia in the cleaning products is drastically higher than the level of ammonia in food. As previously stated, ammonia is a natural compound found in the environment and our bodies. We would never consume a toxic amount through ground beef because for it to be toxic, the ammonia content would be so high that we wouldn’t want the potent product anywhere near our noses, much less our mouths.

The real concern:
Is the ammonia enough to kill the bacteria?
In its 2009 investigative report, the New York Times obtained government and industry records indicating that E. coli and salmonella pathogens were discovered dozens of times in BPI meat. According to NYT, “untreated beef naturally contains ammonia and is typically about 6 on the pH scale, near that of rainwater and milk. The Beef Products’ study that won USDA approval used an ammonia treatment that raised the pH of the meat to as high as 10, an alkalinity well beyond the range of most foods.”

After complaints that the ammonia smell was too pungent in the meat, BPI decided to lower the ammonia levels and claimed that E. coli and salmonella were undetectable at a pH level of 8.5. The USDA had not been informed of this change and was only made aware of it through NYT’s inquiries. Reports of bacterial contamination in the meat followed BPI’s lowering of the ammonia levels, which threw the safety of the lowered pH level into question.

What about nutrition? Is this “pink slime” as nutritious as the rest of the meat?
Consumers and mass media are expressing alarm over the presence of ammonium hydroxide in the meat, even though it’s an ingredient that’s been in their food for decades, and the 2009 NYT report introduced concerns of contamination in the meat. But 9Health reporter Dr. John Torres, voiced his unease over yet another aspect of the processed meat in a USA Today story: Is the ground beef with pink slime less nutritious than the ground beef without it?

BPI says no. The pink slime inventor and primary manufacturer wrote to ABC News this week informing them that the product was nutritious USDA-approved beef. “All beef is a good or excellent source of 10 essential nutrients, including protein, iron, zinc and B vitamins,” H. Russell Cross, head of the department of animal science at Texas A&M University, said in a statement to ABC News. ”Finely textured lean beef helps us meet consumer demand for safe, affordable and nutritious food.”

Is ammonium hydroxide included on ground beef’s ingredient list?
A new USDA law took effect March 1 requiring nutrition labeling for ground, as well as popular cuts of, meat and poultry. Since this was obviously an effort to keep consumers well-informed of what they’re eating, it’s logical to think we would also now be seeing “ammonium hydroxide” listed as an ingredient on such labels. Yet this is not the case.

BPI hired Dennis R. Johnson, a successful lawyer and lobbyist for the meat industry, to fight for the company’s right to exclude ammonium hydroxide from meat labels. The company won by pointing out that another company was just given the government’s approval to exclude a chemical used in treating poultry from ingredient lists.

According to USA Today, ammonia is not required to be listed on any food label because it’s considered a “processing agent.”

Where can I find meat without pink slime?
After this week’s report, ABC News emailed the top 10 U.S. grocery chains and asked them if they used pink slime in their meat. According to ABC, only Publix, Costco, H-E-B and Whole Foods responded, saying they don’t. If you want slime-free ground beef, your safest solution is sticking with meat marked “USDA organic,” which does not contain the processed product.

So is it safe or not?
Despite the USDA and meat industry’s reassurance that pink slime is safe and edible, the 2009 NYT investigation showed evidence that it may come with a higher risk of bacterial contamination. As the Huffington Post pointed out, using the slime only reduces the cost of ground beef by about 3 cents a pound. It makes you wonder if the USDA and meat industry really consider the minimal cost savings worth the potential risk.

Tell us: Are you worried about pink slime in your meat?