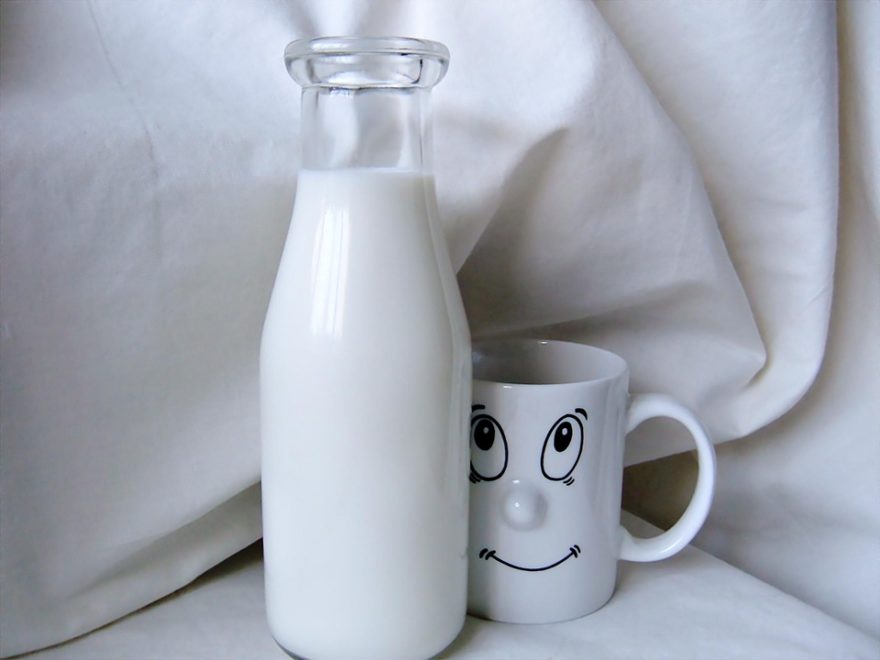 No one has ever really questioned milk’s place on kids’ lunch trays — until now.

On July 19, the Physicians Committee for Responsible Medicine — an organization comprised of “150,000 healthcare professionals and concerned citizens,” according to its website — petitioned the U.S. Department of Agriculture to eliminate milk from the national school lunch program, claiming that it doesn’t affect bone health whatsoever and could actually do more harm than good.

Some research into the issue led to some interesting surprises: PCRM has a curious background that gave us little reason to trust its nutritional advice, but in this case, the organization might be partially right.

Milk is currently offered through the National School Lunch Program, though children are not required to take it or drink it. Effective this month, all milk offered at schools is low-fat or nonfat — even the flavored kind. The USDA’s website for the program states that “fluid whole milk is an important component in an adequate diet, being one of the most important sources of calcium, and contributing substantially to the protein and vitamin A content of a meal.”

PCRM thinks otherwise. In its petition to the USDA, the organization provided the following reasons for removing milk from the program:

Who are these healthcare professionals anyway?
PCRM describes itself on its website as healthcare professionals who “advocate for preventive medicine, especially good nutrition, and who conduct clinical research and advocate for higher ethical standards in research.” The Center for Consumer Freedom — a nonprofit organization that describes itself as “promoting personal responsibility and protecting consumer choices” — would probably find PCRM’s reference to “ethical standards” ironic considering it publicly accused PCRM in 2004 of being “an animal rights group masquerading as a medical charity.”

When PCRM ranked airports based on their healthy food choices back in 2004, it only looked for vegetarian options, completely excluding other potentially healthy restaurants that served meat, which triggered CCF’s criticism. CCF told the New York Times in a 2004 story that “when PCRM offers health advice, they ‘do a very slick job of obscuring their real intentions,’ which is simply to oppose the use of meat, dairy products and alcohol.” The organization called on PCRM to “stop misleading consumers and come clean about its animal-rights motives for attacking restaurants that don’t emphasize strictly vegetarian fare.”

The fact that PCRM defined “healthy food” as low-fat and vegetarian wasn’t the only reason the organization was attacked for hiding its true motives. In 2004, more than $1.3 million in PCRM financing came from the People for the Ethical Treatment of Animals, or PETA, and PCRM president Neal Barnard — who is still president today — was also president of the PETA Foundation at the time, according to NYT. Barnard, a nonpracticing psychiatrist, also helped found the PETA Foundation, but PCRM’s website states that he’s no longer part of it today.

PCRM’s website defends its “objective” ideals, stating that “PETA supported some of PCRM’s programs, notably PCRM’s efforts to stop the Environmental Protection Agency’s cruel high-production volume testing program from going forward, although PETA’s support was never a major part of PCRM’s budget. PCRM is an entirely independent organization and has never been part of any other.”

But are PCRM’s criticisms of milk accurate?
We’re still not totally convinced that PCRM is primarily concerned with people’s health and nutrition. While there’s nothing wrong with animal-rights groups, it’s not responsible or ethical to present animal-rights propaganda as nutrition advice — unless the nutrition advice is scientifically sound. Is it?

Does milk aid in bone health?
We investigated the first two claims we listed from PCRM’s petition — that milk has no effect on bone health, and it doesn’t prevent fractures — and we were surprised to find the organization might actually have a point.

The Harvard School of Public Health states that there’s currently “no good evidence that consuming more than one serving of milk per day in addition to a reasonable diet (which typically provides about 300 milligrams of calcium per day from nondairy sources) will reduce fracture risk.”

A 2000 meta-analysis published by the American Society for Clinical Nutrition examined 46 studies published since 1985 that had produced a total of 57 outcomes on the effects of dairy foods on bone health. Of the 57 outcomes, researchers found that 53% did not show a significant correlation between the consumption of dairy and bone health, compared with 42% showing a significant favorable effect and 5% showing a significant unfavorable effect. The article concluded that, “Without more well-controlled studies, the body of scientific evidence appears inadequate to support a recommendation for daily intake of dairy foods to promote bone health in the general U.S. population.”

Many nutrition experts believe that when it comes to osteoporosis prevention and bone health, we need to be concerned with factors other than dairy consumption — such as exercise, heredity, hormone levels, smoking, protein intake, and intake of vitamins D and K — which they argue have a much greater effect on bone health.

Why can’t kids get their calcium from nondairy sources?
The third claim we listed from PCRM’s petition was that children can get the calcium they need from other, “healthier” foods — such as beans, green leafy vegetables, tofu products, breads, cereals and nondairy calcium-fortified drinks like soy milk and fruit juice.

The National Institute of Child Health & Human Development has an explanation for choosing milk: “Although calcium is found in a variety of foods, low-fat and fat-free milk and other dairy products are great sources of calcium because they have so much of it.” The NIH division also states that calcium isn’t the only benefit of milk; it provides other essential nutrients — such as protein; vitamins A, B12 and D; potassium; riboflavin; and phosphorus, to name a few — that are important for optimal bone health and development.

And the Harvard School of Public Health, though it admitted there wasn’t substantial proof that milk will have an effect on fracture risk, also added that at moderate levels, consumption of dairy products offers other health benefits, such as possibly lowering the risk of high blood pressure and colon cancer.

So while kids should also be consuming healthy vegetables and whole grains, there doesn’t appear to be any reason to shun milk, since it has plenty of health benefits as well.

Is calcium not absorbed well through milk?
The PCRM petition implied that calcium may not be absorbed as well when consumed via dairy sources like milk. The National Institute of Child Health & Human Development claims the opposite, stating that the “calcium in low-fat and fat-free milk and dairy products is easy for the body to absorb and in a form that gives the body easy access to the calcium.” Plus, the organization adds, low-fat and fat-free milk have added vitamin D, which aids in the absorption of calcium.

An article published in the Journal of Nutrition in January 1996 goes so far as to state that the calcium naturally found in dairy products is the most well-absorbed, possibly because lactose aids in calcium absorption.

PCRM’s statement that “animal protein and sodium both leach calcium from the bones and encourage its passage into the urine” is not completely untrue. The National Institutes of Health’s Office of Dietary Supplements states that high sodium and protein intake do increase calcium excretion. However, it also states that more recent research suggests high protein intake also increases intestinal calcium absorption, “effectively offsetting its effect on calcium excretion, so whole body calcium retention remains unchanged.”

Is milk unhealthy?
PCRM’s petition argues that milk has too much sugar and fat to the point of it being harmful to, not protective of, bone health. However, under the new school lunch program that went into effect this month, all of the milk being served contains little to no fat, so the fat argument is irrelevant, as is the animal protein claim, which was debunked in the previous paragraph.

As for sugar, 1 cup of skim milk contains 12 grams of sugar in the form of lactose, according to Livestrong. PCRM suggested juice as an alternative to milk, but since when is juice low in sugar? Here’s an example for the sake of comparison: One cup of Tropicana Pure Premium orange juice contains 22 grams of sugar — almost twice as much as a cup of skim milk. Both contain natural sugars rather than added.

So … should milk be on lunch trays or not?
The evidence points to: Why not? The only effective point from PCRM that really raised our eyebrows was the possibility that milk may not have the bone health effects we’ve been told about since we were kids. Disappointing? Perhaps. But that doesn’t detract from the various other nutritional benefits of low-fat and nonfat milk and the fact that research suggests it’s the most effective form of calcium absorption.

Calling for the total removal of milk from the program seems totally unnecessary and extreme, but it wouldn’t hurt to offer other options at lunch either. Maybe soymilk and juice should have a place next to the low-fat and nonfat milk so children can have multiple healthy options.

Tell us: Do you think milk should be part of the school lunch program?