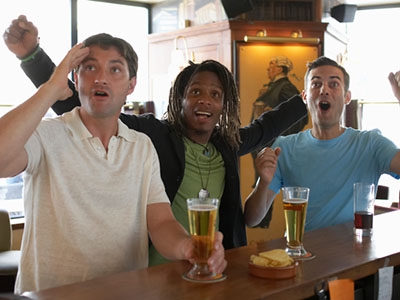 Screaming, jumping, gasping, cheering and drinking aren’t the only ways your sports obsession might be affecting your behavior. A new study published in Psychological Science found that a team’s win or loss affects sports fans’ eating habits the day after the game.

“”Although prior studies had shown that sport outcomes influence reckless driving, heart attacks, and even domestic violence, no one had examined how they influence eating,” says Yann Cornil, researcher at INSEAD Business School and lead author of the study.

By juxtaposing outcomes from two seasons of NFL games with people’s food consumption in more than two dozen cities, researchers were able to determine a relationship between post-game day food choices and team wins and losses. They also analyzed the eating habits of people living in cities without an NFL team or with a team that didn’t play that day so they could compare these results to control groups.

So what’s the psychology behind these findings? The researchers believe that people may feel their identity is threatened when their favorite team loses, so they eat as a way of coping. If your team won, people may feel a boost in self-control, allowing them to make better food choices.

If your team typically experiences more losses than wins, your diet isn’t doomed. Cornil and INSEAD professor Pierre Chandon offered a preventive tip: “After a defeat, write down what is really important to you in life. In our studies, this simple technique, called ‘self affirmation,’ completely eliminated the effects of defeats.”