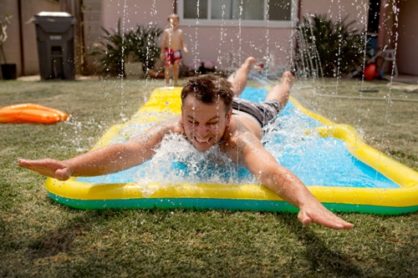 When it comes to backyard watersport, kids have all the fun. Marc Polo in the pool, water gun and water balloon fights and the ultimate: Slip ’n Slide.

My brother and I created what we thought was the most awesome Slip ’n Slide when were kids. You wouldn’t see us for hours — it was too much fun! So why can’t we do that now? Of course we can! There’s no reason why adults can’t have the same rush of racing down a slippery runway into a pool of water.

Slipping back in time

According to the Wham-O website, the “magic water slide” was invented by Robert Carrier while watching his son hose down their slick concrete driveway and slide down it. The product was launched in 1961. Wham-O says that an estimated 10 million Slip ’n Slides were sold between 1961 and 1992.

The problem is that these “magic water slides” are only made for children. Take it from someone who tried it: Don’t use a Slip ’n Slide if you’re older than 12 years old. I was having a few friends over so I bought one — yes, I’m in my 30s; don’t judge me. Not only did it not work very well, it was too flimsy to hold our adult weight — and admittedly boring! The U.S. Consumer Product Safety Commission reported in 1993 that seven adults who used the Wham-O brand Slip ’n Slide suffered neck injuries, quadriplegia or paraplegia, and a 13-year-old suffered a fractured neck between 1973 and 1991. So yeah, don’t use them.

Depending on how much you want to work for your homemade adult-size Slip ’n Slide, it can take 20 minutes, an hour or three days to complete the task. Here are some variations:

Want the fun without the fuss? This DIY slide is only four steps and easy to construct. All you need is a tarp, garden staples, duct tape and a hose.

With one hour to spare

Want something steadier and slightly more impressive? If you have free time and some trace of craftsmanship, try this design from Geek Dad. You’ll need heavy-duty plastic, pool noodles, Velcro strips, stakes and a sprinkler hose or lawn sprinkler. We recommend adding a baby pool to the end for even more splashy fun!

This one is a tad impractical, but we admire this person’s gumption. The list of supplies is long and includes such common household items as round bales, around 20 tires and a sump pump. The creator completed this giant slide in three days with a few friends.

Propelling down an adult version of the Slip ’n Slide — with a longer, wider runway — could be just as dangerous, so please play it safe. Find an open space with no obstructions in your way, like trees. And of course, think about where you land. (Don’t launch yourself onto oncoming traffic.) Check the surface for any rocks as this will tear your runway — not to mention your rear-end. Use commonsense and don’t attempt anything stupid, which includes hurtling yourself down a homemade Slip ‘n Slide if you have any medical conditions that might be exacerbated by doing so.