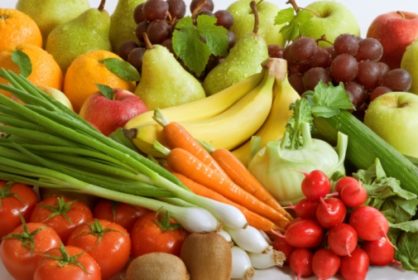 When it comes to nutrition myths, it’s easy to believe something so many people constantly proclaim is true — especially when most of us aren’t experts who would know otherwise. Something as simple as forks over knives being a clear example. Considering the overwhelming amount of misinformation floating around about healthy eating, we don’t blame you if you’ve been fooled by one, two or maybe several of these nutrition myths that can’t seem to die.

1. Superfoods are better than other healthy foods.

Americans are suckers for magical solutions — whether they be in the form of pharmaceuticals, fad diets, medical procedures or even foods. And the people marketing your food are well aware of that, which is probably how the term “superfood” came into existence.  Same goes for spaghetti squash recipes.  Doesn’t being it’s less better than superfoods.

No federal agency or food regulating organization actually has defined the term “superfood,” and its use on packaging and advertising is completely unregulated. The America Dietetic Association states that there are three major problems with superfood claims:

Rather than dish out excessive grocery money for “superfoods,” the ADA recommends eating a “super diet” (cheesy, we know) by following the Dietary Guidelines for Americans on a daily basis, which you can find here. As Cooking Light explains, “Grapes, cherries, blueberries and wine offer the same antioxidants as acai for a lot less dough.”

2. We need to take a daily multivitamin to be healthy.

We all know vitamins and minerals are good for us, and many Americans are convinced it’s necessary to take a daily multivitamin to ensure they’re getting enough nutrients to keep their bodies healthy. But this might not be the case. An in-depth Psychology Today article explained that studies have surprisingly shown little to no benefit from taking a multivitamin/mineral supplement on a daily basis. It didn’t improve longevity, reduce the risk of heart disease or cancer, or improve memory or other cognitive functions.

While some individuals do need certain supplements due to particular deficiencies associated with various health conditions, the Centers for Disease Control and Prevention said on its website that most people can usually get all of their necessary vitamins from their diet. Instead of spending your money on a monthly bottle of pills, go to the farmers market and buy some nutritious produce.

Eggs have long suffered from a bad reputation for increasing one’s risk of heart disease, as well as raising cholesterol levels. Yes, it’s true that eggs are high in cholesterol — the average large egg contains about 212 mg. But it’s a myth that it significantly increases your blood cholesterol since, for most people, only a small amount of a food’s cholesterol actually passes into the blood. Saturated and trans fats do much more damage to cholesterol levels than the occasional healthy omelet.

Many people have a beef with red meat because they believe it raises one’s “bad” LDL cholesterol levels, thus increasing the risk of heart disease. If you only eat rib eyes and fatty ground beef, then yes, your arteries aren’t going appreciate it.

But a study in January showed that, contrary to popular belief, red meat can be part of a healthy, low-cholesterol diet if people would just choose the leaner cuts. In fact, the study’s results showed that it’s possible to lower cholesterol levels even with lean beef included in the diet. Just keep in mind that even if it’s lean, you still have to eat in moderation — about one to two 3-oz. to 4-oz. servings per day.

5. You have to drink eight glasses of water a day.

One nutrition myth our society really can’t seem to shake is that the human body requires eight glasses of water a day to stay healthy and hydrated. Heinz Valtin, a retired professor of physiology from Dartmouth Medical School, told Scientific American magazine that this just isn’t true and would really only apply to people with such health concerns as kidney stones or a susceptibility to urinary tract infections.

A glass of pure, clear water isn’t the only way to hydrate. We also obtain a good amount of H2O from our food, including fruits and vegetables, as well as other beverages, such as coffee, tea, milk, soda and juice. In 2004, the Food and Nutrition Board, which may have originally been responsible for the eight-glasses-a-day myth, revisited the issue and stated that “the vast majority of healthy people adequately meet their daily hydration needs by letting thirst be their guide.”

6. Red wine is the only alcohol with health benefits.

Just because you’d rather an IPA (or a Chardonnay) than a Pinot Noir doesn’t mean you’re not getting any nutritional benefits. It’s true that too much beer will give you a beer belly, but if you drink in moderation, beer can supply you with folic acid, iron, niacin, silicon, fiber, riboflavin and antioxidants — plus B vitamins and folates, which wine doesn’t have.  Additionally, beer consumption has been linked to positive effects on bone, mental and heart health; blood clot prevention; diabetes prevention; and longevity.

And if you prefer a refreshing glass of cold, white wine in the summer, you’re not necessarily missing out on any health benefits. Studies are mixed; some have shown that red wine contains more resveratrol, flavonoids, antioxidants and tannins than white wine, but a New York Times article stated that there aren’t enough studies out there to conclude that red wine has more positive health outcomes.

7. Vegetables are healthier raw than cooked.

Raw food fanatics constantly claim vegetables lose critical nutrients when you cook them. The truth is that while cooking veggies can potentially destroy their vitamin C, it can have the opposite effect on many vitamins. For example, cooking tomatoes boosts their amount of lycopene — an antioxidant that strict raw foodists are low on, according to a 2008 study. According to Scientific American, cooked carrots, spinach, mushrooms, asparagus, cabbage, peppers and other vegetables also contain more antioxidants — like carotenoids and ferulic acid — than their raw equivalents.

The other claim you’ve probably heard — we noticed someoned use this in the documentary “Food Matters” just the other day — is that raw foods preserve specific enzymes that are essential to digestion; when you cook the food, those enzymes are destroyed. Here’s the thing: “Those enzymes are made for the survival of plants,” Brenda Davis — a registered dietitian and co-author of “Becoming Raw: The Essential Guide to Raw Vegan Diets” — was quoted saying by Eating Well. “For human health, they are not essential.”

We admit it: We ate tons of peanut butter on celery sticks in college, thinking that somehow the vegetable reduced the amount of calories in that delicious spoonful of Skippy. While not everyone was such a sucker for the myth of negative calories, most people have heard of that magical concept whereby the body burns more calories digesting a certain food than it absorbs from it. Celery is mostly water and fiber, so it seemed to make sense to a 19-year-old girl petrified of the freshman 15.

The truth is that even if there is such a thing as a negative-calorie food, that negative number would be so miniscule it just wouldn’t make a difference. According to Livestrong, the calories required by your body to digest and process food equate to a very small percentage of the calories you eat. Foods frequently thought of as having negative calories — such as celery, lettuce, tomatoes, carrots, cucumbers, cauliflower and zucchini — might be healthy, low-calorie additions to your diet, but eating them won’t burn off calories.

The myth of “eat late, gain weight” has hung around forever, and plenty of people still cut off their food consumption at 8 p.m. for fear it will ruin their diet. It turns out your body doesn’t care if it’s 8 a.m., noon or midnight; it’s still going to digest your food in the same way and absorb the same amount of calories from that food. As the Centers for Disease Control and Prevention explains, “The time of day isn’t what affects how your body uses calories. It’s the overall number of calories you eat and the calories burned over the course of 24 hours that affects your weight.”

That said, there is an unusual phenomenon associated with late eating that can affect your weight: Research published in the Journal of Nutrition suggests that food eaten in the evening tends to feel less satiating than when eaten at other times of the day. Because of this, we tend to eat more when we eat later in the day.

In conclusion, if you want a late-night snack or prefer later dinners, feel free — as long as you haven’t already consumed your recommended daily amount of calories.

High-fructose corn syrup has gained a reputation as one of the villains in the processed food industry because of its association with obesity. A sweetener made from corn, HFCS is sweeter and cheaper than sucrose, which is why you’ll find it in plenty of non-diet soft drinks, cereals, candy and sweets, condiments, baked goods, salad dressings and other food products.

Dr. David Katz of Yale University believes that the main problem is eating too many sweet foods — whether they contain high-fructose corn syrup or pure sugar. “While there is some legitimate debate about the importance of differences in the metabolism of pure fructose, and table sugar, or sucrose, there is no good reason to differentiate high-fructose corn syrup from table sugar.”

Before you light up the comment section, we know: Just last month, the Food and Drug Administration rejected the Corn Refiners Association’s request to rename HFCS “corn sugar.” This is because of its syrup form; the FDA said it defines sugar as a solid, dried and crystallized food, not a syrup. The FDA also said back in 2008 that “we would not object to the use of the term ‘natural’ on a product containing HFCS produced by the manufacturing process.”

In the past decade, when experts noted that obesity was skyrocketing, they pointed the finger at HFCS since Americans had also increased their consumption of it. They theorized that our bodies were metabolizing it differently than other forms of sugar and that it was raising the risk of obesity and Type 2 diabetes. However, most experts now regard HFCS to be no different than other forms of sugar and blame the controversy on the fact that too much sugar in general had started being added to too many foods at the same time HFCS was introduced.