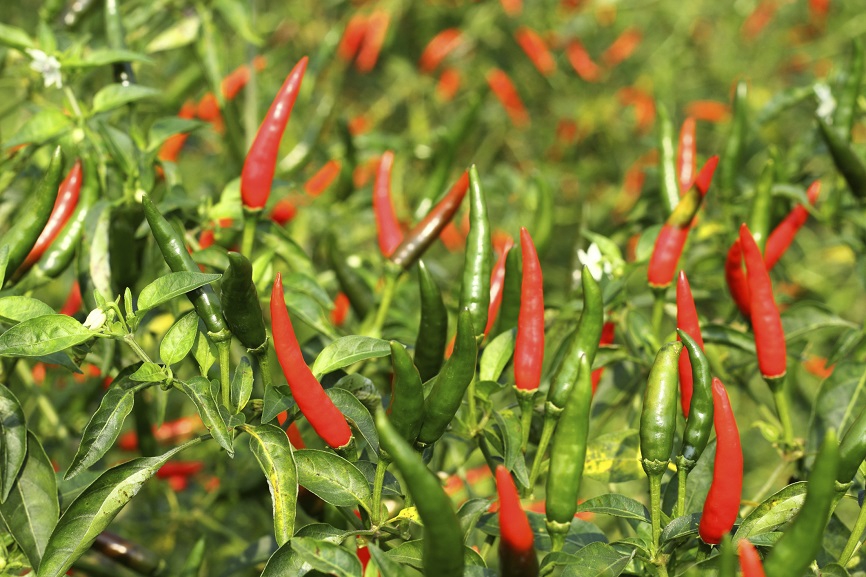 For a long time, everyone thought the ghost pepper topped the list of crazy-spicy, feels-like-your-tongue-will-never-taste-anything-ever-again hottest peppers in the world. The truth: Despite packing a lot of heat, it got bumped down to No. 4 in 2013.

Based on test results from New Mexico University’s Chile Pepper Institute, here are 2013’s top 10 spiciest peppers in the world, ranked by the Scoville heat units of each. But wait, there’s more. If you thought those were hot stuff, keep reading to see which peppers made the cut in 2014, according to USA Today. Can you guess which peppers remain, and which got burned?

Imagine chewing an entire jalapeño pepper at once. Now multiply that by 400. That’s a Trinidad moruga scorpion. This golf-ball-sized pepper stole the No. 1 spot in February 2012 when the Chile Pepper Institute declared it the world’s hottest pepper. At 2 million SHUs, you might be better off eating an actual scorpion.

Trinidad apparently likes its peppers mad-hot, because the world’s second hottest chile pepper came from the same place as the first. The chocolate 7-pot is shaped almost like a habanero, with little dimples throughout. Good luck getting your (glove-covered) hands on one of these puppies, though — they’re very difficult to find.

Ranked the world’s hottest pepper by Guinness World Records in 2013, this pepper takes the No. 3 spot based on CPI’s findings. The 1.5 million heat index still makes it hot enough that, in order to cook with it, cultivators have to wear chemical masks and body suits.

Named the world’s hottest pepper by Guinness World Records in 2007, the Naga Bhut Jolokia — or “ghost pepper” — is 400 times hotter than Tabasco sauce. This Indian chile pepper grows to about 2.4 to 3.3 inches long with a red, yellow, orange or chocolate color.

Typically grown on small, private farms in a rural area of Trinidad, the Trinidad 7-pot is a rare relative of the Trinidad Scorpion, with a habanero-like shape and pimpled skin. Supposedly its name originated from the fact that a single pepper can heat seven pots of stew.

This 2-inch chile pepper starts out emerald green and ripens into the chocolate color for which it’s named. It’s a popular ingredient in Caribbean jerk sauces and marinades.

The Red Savina held the “world’s hottest pepper” Guinness record between 1994 and 2006, and has been selectively bred to produce hotter, heavier fruit. According to RedSavina.com, 1 gram of this pepper can cause detectable heat in 1,272 pounds of sauce.

Named for its resemblance to the Scottish Tam o’Shanter hat, the Scotch Bonnet is found mainly in the Caribbean and is used to flavor hot sauces and condiments around the world.

A close relative of the Scotch Bonnet, the lantern-shaped orange habanero pepper is 1 to 1.5 inches long and ripens from green to light orange. It’s primarily used in Mexican and Caribbean cuisine.

A pepper of many names, the rocoto is also known as the locoto, caballo, manzano and canario. It’s grown in the Andes and is apple- or pear-shaped with black seeds and hairy leaves. Before the fiery heat blasts your tongue, the rocoto gives a sweet, citrus taste.

So are you ready to see how the list has changed in a year?

If you thought it couldn’t get any hotter than Trinidad Moruga Scorpion’s 2 million Scovilles, well get ready to meet the new hottest pepper in town. Bred by researchers in South Carolina to be as hot as possible, the Carolina Reaper hits 2,200,000 Scovilles.

This pepper may have lost its crown, but at 2 million Scovilles it remains on the list, and for the time being, is holding tightly to the No. 2 spot.

New on the list at 1.9 million Scoville units — oh, so close! — the Brain Strain is named for the bumpy brain it resembles. It’s still so hot, that it may bring zombies back to life.

Tying the Brain Strain’s 1,900,000 Scoville units, the 7 Pot Primo has taken its scorpion-like tail and bumped its distant relative Red Trinidad 7 Pot right off the list.

This pepper is more than just hot stuff. According to Crazy Hot Seeds, it is lauded for being one of the hottest peppers with the best flavor. Crazy Hot Seeds adds that it’s also called 7 Pod Douglah, Chocolate 7 Pod or the 7 Pot Brown.

This pepper may have been top dog, so to speak, for a few years, but the No. 6 spot is nothing to sneeze at — although it will still probably make your eyes water.

The Naga Viper is reportedly an extremely rare lab-grown pepper that took years to cultivate. It’s probably why it’s still holding on to the top 10 in the No. 7 spot.

This pepper is as ugly as it is hot, and although it’s only No. 8 on the list, it will still make you wonder whether you are eating white fire.

From No. 4 last year, the Bhut Jolokia falls to No. 9. Just consider for a moment how profoundly hot this pepper is, and the fact that this year there are eight peppers ahead of it. Can you say ouch?

Let’s hear it for Red Savina Habanero for managing to stay on the top 10 list. Will it be able to hang on next year?