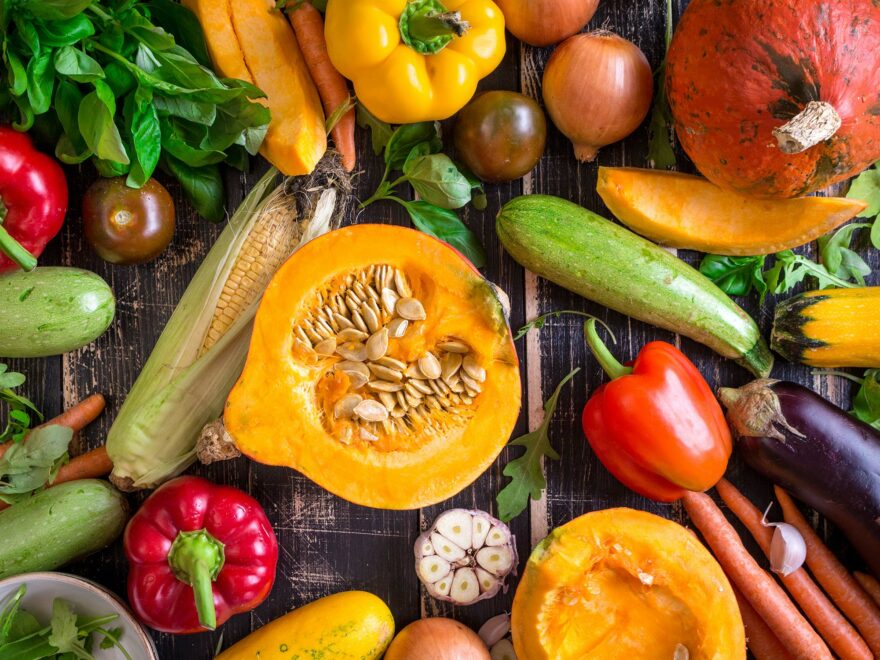 At a young age, most of us learn about the 4 seasons, from which months comprise each quarter of the year to the unique weather patterns we generally associate with each season. The knowledge of what’s growing during these different times of year, however, now that’s a bit less well-known. In fact, the secrets of seasonal produce seem a bit like insider knowledge, privy only to restaurateurs, food critics, and cookbook authors.

In an effort to bring this information to the people who need it most, we’ve put together a complete guide to seasonal vegetables! We’re sharing everything you need to know about when and how to score the best in season produce, no matter the time of year. Join us as we work our way through the best seasonal food your local veggie patch has to offer, from artichokes to zucchini!

What Does “In Season” Actually Mean?

Ever notice that during the springtime, every restaurant menu everywhere is suddenly filled with dishes that feature candy-sweet peas, snappy green beans, and crunchy asparagus? Or how about in the autumn when piles of creamy sweet potatoes and crunchy carrots are fixtures of most folks’ holiday tables?

The reason for these well-known correlations is seasonality! Simply put, fruits and vegetables are considered to be in season when they reach the peak of their particular growing season, becoming the most plentiful and tastiest versions of themselves.

Our Guide to Which Vegetables Are in Season Now

The season for any given vegetable will of course vary depending on location, rainfall, weather patterns, and any other variable growing conditions. Therefore, the following guide is a generalization of which vegetables are in season throughout the year in North America.

Keep in mind that even in this region, a range of different conditions will be experienced! When the Gulf Coast is muggy and hot, New England may be cool and crisp. These factors greatly affect what produce is growing and harvestable, and not all items will be available even if they are listed as in season on our seasonal produce calendar.

As we make our way through the four seasons in the guide that follows, we’ll discuss a few of the vegetables that are at their peak in each of these different times of the year. You’ll notice there are several vegetables which are considered to be in season over the course of multiple seasons and we’ll be sure to mention those when they come up!

As the cold temperatures of winter become a distant memory, new life quite literally “springs” up across the country. Winter makes its best effort to hold a firm grasp however, as chilly days frequently interject those first few weeks of warmth. This mixing of temperatures also causes frequent precipitation in the form of rain for most areas, and snow for others.

This unpredictability in terms of temperature and precipitation can be rough on plant life, so the vegetables that are in season during the spring tend to be quite hardy, frost resistant, and moisture-loving! Some vegetal stars of the spring season are:

As the cooler days of spring become obsolete, full-force sunshine and high temperatures take hold over much of the country. This heat may be either exceptionally dry or supremely muggy depending on region and of course, different vegetables will thrive under different circumstances.

While there are plenty of vegetables that do come into season during the summer months, there are also a lot of plants that merely use the hottest months of the year as a time for growth. Some vegetable plants grow all summer but do not actually yield any edible produce until fall appears on the horizon. As you can see, the following list of veggies that say “bring on the heat!” is a bit shorter than the other seasons:

Fall is the season of bounty, there’s no doubt about that. The dropping temperatures serve to give some of those cold-weather loving spring crops we discussed earlier a second season, while more slowly developing vegetables that have been growing all summer finally become harvestable.

This coalescence of these crop types leads to an interesting mix of veggies that come into season during the fall like beets, peas, potatoes, radishes, and winter squashes as well as leafy greens like kale and Swiss chard. Let’s discuss a few of our favorite autumnal produce options:

When thinking about winter, most folks don’t necessarily equate it with bountiful piles of fresh vegetables. It’s true, winter is by far the slowest season as far as growing is concerned but even in the depths of those chilly months, there is fresh and seasonal food to be found!

Just like certain animal species–we’re looking at you polar bear!–are naturally equipped to handle cold conditions, some plants thrive in crisp weather as well. A number of vegetables that are in season during the winter are:

Vegetables in Season FAQs and Tips

Why Are In Season Vegetables Better?

Aside from coming across as super knowledgeable to all of your friends, there are a number of benefits to eating vegetables that are in season! Generally speaking, in season fruits and vegetables are:

Since vegetables that are in season also tend to be the most abundant, this causes a temporary drop in the price of these items since there is plenty to go around! In addition, veggies that are in season in your local area don’t have to travel all that far to get to you, further reducing costs to farmers and consumers alike.

In addition to reducing the carbon footprint by requiring less transit time, vegetables growing in their natural season do so freely and without much coaxing on the part of farmers. This means that fertilizers and other interventional aids are less necessary. Also, seasonal rotation of crops allows the soil to go through more natural cycling, as one crop may deplete soil of certain nutrients while the next naturally replenishes.

Superior in Flavor and Freshness.

Without a doubt, seasonal veggies taste the best! More than likely you’ve been disappointed by some extremely out of season asparagus in the dead of winter or struck out on finding any corn on the cob in the springtime.

When vegetables are out of season they are typically harvested in an underripe state in order to survive whatever long journey they are in for. This takes a huge toll on their natural flavor development as well as greatly increases the length of time between harvest and your dining table.

What Are the Health Benefits of Eating Seasonally?

In addition to reducing your exposure to chemical fertilizers, there are a number of other health benefits associated with choosing to eat vegetables that are in season.

First and foremost, since the produce is able to ripen naturally and to its full potential, there is an increased number of important nutrients and phytochemicals in veggies that are in season.

Also, along the same school of thought as “eat the rainbow”, seasonal eating exposes you to a wider range of fresh produce. Instead of eating the same few vegetables month after month, year after year, cycling your produce choices with the seasons ensures that your body is exposed to all of the different goodies each unique vegetable has to offer.

Where Do You Buy Vegetables That Are in Season?

Anywhere! Once you have the knowledge of which vegetables are in season at what times of year, you can use it to inform your purchasing decisions, no matter what type of store or market you happen to find yourself in.

Farmer’s markets are great places to find seasonal produce as local farmers are always going to bring their freshest and most of-the-moment goods to the market for sale. Grocery stores and specialty shops are another great place to shop for locally seasonal vegetables as well because believe it or not, many stores deal with local farmers and producers directly!

What Vegetables Are in Season? It Depends!

As you can see, when it comes to understanding which vegetables are in season at any given time, the answer will be greatly impacted by regionality and climate conditions. Our version of the seasonal produce calendar consists of general information based on the vegetable growing seasons across North America, but areas of the world that don’t experience much seasonal fluctuation will of course have different cycles of crops.

If you’d like to round out your knowledge of season produce, be sure to check out our full guide to fruit in season for a comprehensive understanding of seasonal eating–from cabbage, carrots, and cherries all the way through spinach, strawberries, and summer squash! Now go forth and conquer the produce department, once and for all.