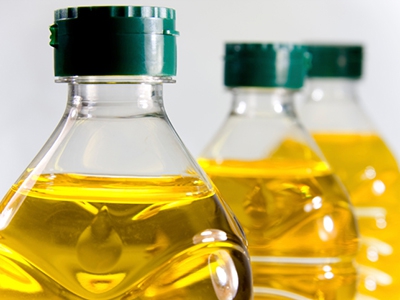 We’re going to go all Rachael Ray on you and stick to “EVOO” to save a little time and space in this post (sorry!). EVOO is the highest-quality olive oil and is extracted from olives through a process called cold pressing, which means the oil is removed using only pressure and was not heated over a certain temperature. This is the best way to keep all of the good-for-you antioxidants and monounsaturated fats in the oil. Cold pressing also preserves the most olive flavor and keeps the acidity under 1%.

EVOO has a low smoke point, which means it doesn’t take a high temperature for it to start smoking. Use EVOO for anything from salad dressings and cold dishes to cooking.

Though virgin olive oil (without the “extra”) is produced through the same process and is not blended with other oils, it’s made from slightly riper olives. It has a lighter flavor and is around 2% acidity. Use virgin olive oil for cold dishes or low-temperature cooking.

Also labeled simply “olive oil,” pure olive oil is a mix of refined olive oil and virgin olive oil, says Eryn Balch, EVP of the North American Olive Oil Association. “These oils still come from the ‘first press’ of olives,” Balch says. “If the quality of the original oil is not good enough to be virgin or extra virgin, it is refined to remove the bad odors and flavors and then blended with some virgin to be called ‘olive oil’ again.”

Because of the heat used in the extraction process, this type of olive oil contains fewer antioxidants but still offers the same amount of monounsaturated fats as the rest of the oils.

Pure olive oil is great for cooking and frying.

Despite its name, light olive oil has just as many calories and just as much fat as the other types. The word “light” refers to the fact that it’s lighter in flavor — you won’t get as much of that olive taste. This makes it great for baking since you’re usually not looking for an olive flavor in your baked goods. However, it can also be used for sautéing, grilling and frying. It has a high smoke point, which means it takes a high temperature for it to start smoking.

Which is the healthiest?

This is a tricky question. First of all, you should know that they all contain the same amount of calories and fat. However, the higher-quality oils, like EVOO and virgin olive oil, contain more of the good-for-you healthy phenols (i.e., antioxidants). According to FitSugar, EVOO also has higher levels of vitamin E, vitamin A, chlorophyll and magnesium.

That said, heat destroys a good amount of those beneficial components. In fact, a report published in the journal Food Research International this year stated that cooking with olive oil degrades its antioxidant power so much that you might as well be using other refined oils, like vegetable oil, which is cheaper.

Furthermore, your EVOO might not be as EVOO as you think. In the past couple of years, study after study has found that even the major EVOO brands don’t meet the EVOO standards established by European regulators. Just last month, the U.S. International Trade Commission published a report stating that “current international standards for extra virgin olive oil allow a wide range of oil qualities to be marketed as extra virgin. In addition, the standards are widely unenforced.”

So what should you do?

We recommend opting for the EVOO for cold dishes and salad dressings. As far as cooking oils, the evidence suggests pricier options like EVOO don’t necessarily ensure any health benefits for you. So if you’re indifferent about the strength of the olive taste, you’re probably not doing yourself a disservice by buying the cheaper olive oil or vegetable oil.