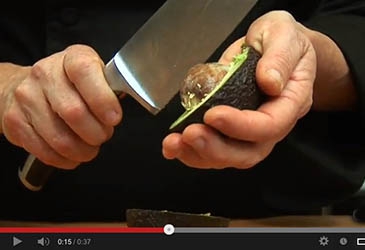 Never again will you have to tediously peel off every layer of each tiny pearl onion, or spend half of your prep time peeling hard-boiled eggs or removing corn husks, or panic that you won’t finish prepping before your produce browns. These simple, brilliant tips save you the trouble — without any fancy gadgets.

1. How to: Peel individual garlic cloves

Lay the clove on the cutting board and place the flat side of the knife on top of it. Use the heel of your hand to hit the knife, putting enough pressure on the clove for the skin to simply fall off.

2. How to: Peel many garlic cloves at once

Even with the previous trick to peeling individual cloves, it can be a pain to peel a whole bunch of cloves for garlic-heavy dishes. The trick: Hit the head of garlic with the heel of your hand to open up the cloves. Throw all the cloves into a big mixing bowl, and cover with a second mixing bowl. Then “shake the dickens out of it,” as Saveur executive food editor Todd Coleman demonstrates. Voila! It’s peeled — like a magic trick only with mixing bowls instead of a hat.

3. How to: Remove husks from ears of corn

Cleaning corn can be time-consuming — and it can seem impossible to eliminate those thin corn silks that get stuck in your teeth later. You won’t believe how easy the solution is: Place two ears of corn in the microwave (husks still on) for eight minutes. Use oven mitts to remove them from the microwave, place them on a cutting board and use a sharp knife to cleanly chop off the entire bottom end of the ear of corn (the one that doesn’t have a bunch of green pieces coming out of it). Now squeeze the other end of the husk, and the corn should easily slide out — with none of that annoying corn silk!

4. How to: Remove the tough stems of hearty greens

Real Simple had a nifty trick for getting rid of the tough stems on veggies like kale, chard, mustard greens and collards — no knife required. With one hand, hold a leaf at the bottom by the thickest part of the stem, use your other hand to gently pinch the leaf with your index finger and thumb, and then pull it up and off along the stem.

5. How to: Peel pearl onions

We love pearl onions; and for years, we avoided using them in dishes because honestly, we just didn’t feel like spending 30 minute peeling each one. Finally, someone saved us from our impatience with this trick: Chop off the tip of the onion (the end opposite the root end), cook in boiling water for two minutes and drain. When they’re cool enough to touch, gently squeeze each one at the root end, and the little guys will slip right out! Chop off the remaining roots, and you’re ready to get cooking.

6. How to: Remove an avocado pit

If you haven’t learned this trick yet, it will change your life. To remove an avocado pit, simply cut the avocado in half length-wise, firmly strike the pit with a knife and twist it. Done! (Just be careful removing the pit from the knife.) Scoop out the fruit from each half with a large spoon.

7. How to: Soften butter

For the impatient baker, waiting for butter to soften can be like waiting for a pot to boil. To quicken up the process, use a grater to shred the required amount into a mixing bowl. It’ll be ready before you know it.

8. How to: Prevent apples from browning

9. How to: Prevent avocados from browning

The long-held myth is that replacing the pit in an avocado half will keep it fresh and prevent it from browning, but unfortunately it’s just that — a myth. One effective trick is to place the halves in a bowl of water with the peel still on. Unless you’re making guacamole or smoothies, just wipe off the wet side and slice when you’re ready. (via 52KitchenAdventures.com)

10. How to: Prevent potatoes from browning

Are you sensing a pattern here? With this tip, you can break up the prep time and not worry about peeled potatoes becoming brown. Peel them one night, throw them in a bowl of cold water and store them in a cool place (not the refrigerator) overnight. The next day, they’ll still be fresh for slicing and dicing. (via SlashFood.com)

11. How to: “Peel” hard-boiled eggs without peeling

We have no idea how Tim Ferriss figured this out, but it works! Boil the eggs at slow boil for about 12 minutes with about two inches of water above the eggs and a teaspoon of baking soda. Here’s where it gets crazy: Give one end of the egg a good tap on the counter and remove the shell pieces from the tip. Repeat with the other end of the egg. Now hold the egg’s width in a cupped hand, raise it to your mouth and blow. The egg falls right out of the shell! Another option, for when you don’t need the eggs to be whole, is to simply cut the egg in half with a knife and scoop out both halves with a spoon. No peeling necessary!

Make a thin cut all around the potato, length-wise, trying to cut only the skin. Boil the potato until it’s soft inside, and then plunge it in ice water for 10 seconds. Now all you have to do is gently rub the potato, and the skin falls right off.

13. How to: Remove salmon bones

Unless you’ve had plenty of practice, removing the thin, soft pin bones in a salmon fillet can be challenging. Real Simple’s trick to pulling it off without mutilating the salmon: Run your index finger along the center seam of the fillet, going against the grain. If there are any pin bones, you should feel them protruding at about half-inch intervals. Use clean tweezers to grasp the tip of the bone and tug, pulling at a slight angle instead of up and out.

14. How to: Prevent a pot from boiling over

Weird trick, but simply placing a wooden spoon on top of a boiling pot will prevent it from boiling over. You can use a spoon made out of something other than wood, but the obvious advantage of a wooden spoon is that it won’t be scalding hot when you remove it.

Tongs can double as lemon-squeezers. Place half of a lemon (or lime or orange) between the prongs over a bowl or pitcher and squeeze the open end of the tongs with both hands. It’s these kinds of concepts that make us love Martha Stewart.

16. How to: Preserve herbs for later use

This is one of our all-time cooking pet peeves: You can’t buy a small bunch of herbs anywhere. Even the smallest bunch you find at the grocery, bodega or farmers market will be too much for a one- or two-person household to use throughout the week before some of it goes bad. The solution: Freeze the herbs in olive oil in ice-cube trays! The next time you need herbs, just pop out one of those cubes and throw it in the pan.

17. How to: Core a head of iceberg lettuce in 3 seconds

This kitchen technique doubles as a stress reliever. To quickly remove the core of a head of iceberg, Boston or bibb lettuce, slam it down hard, with the core of the lettuce parallel to a flat surface (like a cutting board or counter). The core is immediately freed, and all you have to do is pull it out. Proceed with your prep!

18. How to: Cut multiple cherry tomatoes (or similarly shaped food) at the same time

If you’ve ever tried cutting cherry tomatoes in half for a refreshing summer salad, you know how difficult it is to chop multiple ones at once without them sliding all over the place. The only way to do it is to tediously cut each one individually — or is it? Grill a Chef created a brilliant solution: Take two tops from two typical plastic takeout containers. Place the cherry tomatoes — or other tiny food you want to slice together — on the top of one lid, so the rim of the lid prevents them from moving around. Place the other lid on top of the tomatoes, using your hand to hold it in place, and saw through the gap with your knife — Grill a Chef recommends using a serrated knife.

Fruit with a name like “kiwi” shouldn’t leave you aggravated when you try to peel it. (We actually have trouble saying “kiwi” without smiling.) To quickly skin it, Martha Stewart recommends trimming both ends of the fruit and easing a tablespoon between the flesh and the peel. Turn the kiwi, pressing the back of the spoon against the peel as you go, and the whole fruit should slide right out.

20. How to: Open a stubborn pistachio

Whether your nails are short and stubby or you’d prefer to not break them, using nails to open a tight pistachio just isn’t always a viable solution. Spare your nails, and use a discarded pistachio shell half to open it! Simply stick the top of the small end into the partially opened pistachio and twist.

Don’t lie — it happens to you too. Every now and then, you screw up your perfect egg-cracking routine, and a tiny piece of shell falls into the bowl with the raw egg. Then, if you’re anything like us, you spend a good 60 seconds attempting to pull it out of the bowl. It turns out all you have to do is wet your finger with water first — you’ll be stunned how much easier it is to get a hold of that egg shell piece.

22. How to: Seed a pomegranate

We love pomegranates. We don’t love the mess they make when we’re trying to get the fruit out of them. Wit & Whistle found the solution in a bowl of water. Cut an X in the top of the pomegranate, about halfway down the fruit. Set it in a big bowl of water, place your thumbs in the center of the X and pry the peel apart. While the pomegranate is underwater, carefully brush the seeds away from the membrane. The seeds will sink to the bottom of the bowl, and the empty membrane will float. Use a strainer to scoop up the remaining membrane from the water, and then strain so you’re left with only the delicious seeds.

23. How to: Determine if eggs are still fresh

Can’t remember how long ago you bought those eggs? Easy fix: Place the eggs in a bowl of water. If they sink to the bottom, they’re still good. If they float, toss them.

24. How to: Cut roly-poly vegetables

Potatoes, squash and beets can be tricky (and sometimes dangerous) to cut — their round shape causes them to roll around the cutting board while you’re trying to chop. Here’s what you have to do: Cut a thin slice along the length of the vegetable to create a flat side, turn it cut-side down on the cutting board and slice away. When you get to the point where it starts to roll again, flip it onto the flat side from your last cut and continue to slice.

25. How to: Separate egg yolks from egg whites

OK, so this one isn’t really a timesaver. It’s just so unusual that we felt the need to include it purely for entertainment. Crack an egg into a bowl. Gently squeeze an empty plastic water bottle, and hold it over the egg yolk. It should suck up just the egg yolk, allowing you to transfer it to another bowl. Totally not worth the time or effort, but kind of fun to watch.