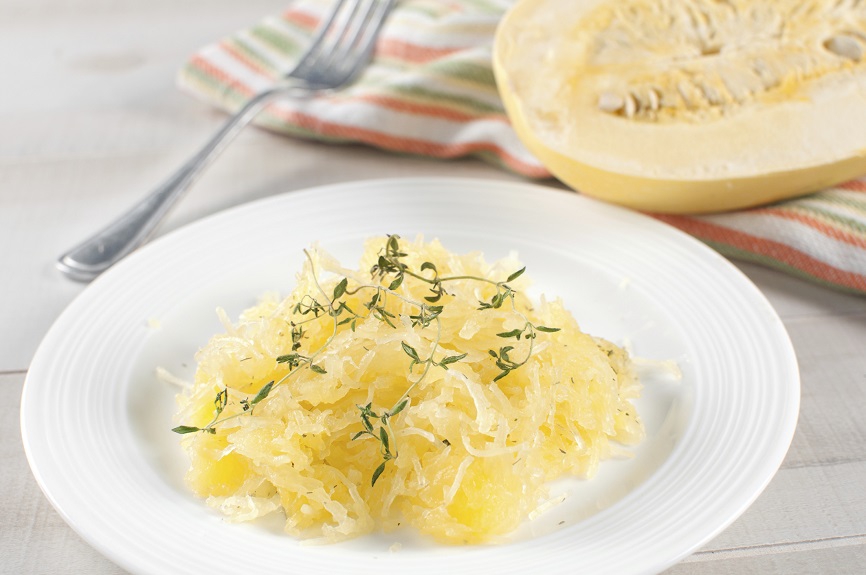 If you’re trying to convince a man to like spaghetti squash, this is your recipe. (We’ve tested this. It works.) This squash dish from Sweet Treats & More packs a punch and uses hot sauce and blue cheese to mimic the flavors that come with an order of hot wings. Gotta love comfort food that’s actually good for you.

We might have surprised you with cauliflower pizza crust back in April, but this will blow your mind: Spaghetti squash can transform into pizza crust, too. In fact, the recipe developers over at Jo and Sue’s blog claim it’s even better than its cauliflower counterpart.

Everyone knows that they can sub spaghetti squash for pasta in a classic spaghetti with marinara sauce. But you can go beyond that! Try this shrimp scampi from Pumps & Iron for a super easy, nutritious meal. All the yum without the carbs.

If you’re really craving some comfort food, this spaghetti squash recipe from Ari’s Menu is here for you. Spicy turkey sausage, meat sauce, creamy ricotta cheese, and brown and bubbly mozzarella cheese all packed inside a spaghetti squash. You won’t even miss the pasta.

Give yourself some garlicky goodness with this recipe from A Healthy Makeover, which pulls off a creamy veggie dish with zero cream. Healthy, simple and delicious.

Make your own homemade pesto from pine nuts, garlic, basil leaves, arugula and Parmesan with this recipe from The Lush Nest. Use it to coat your spaghetti squash, cherry tomatoes and prawns, and you’ve got a super delicious Meatless Monday dinner.

It’s like a Chipotle bowl — only better for you! This recipe from The Comfort of Cooking stuffs a spaghetti squash with onion, garlic, jalapeño, red bell pepper, beans, corn, cilantro, lime juice and some seasonings.

The recipe creator at Detoxinista swears this yummy casserole tastes ridiculously similar to her family’s creamy hash brown casserole — only this one has low-calorie, nutritious spaghetti squash instead of potatoes. And it only requires six ingredients: spaghetti squash, butter, yellow onion, garlic, Greek yogurt and raw goat cheddar (feel free to use regular cheddar).

This gremolata recipe from A Family Feast makes for a wonderful light and fresh meal that’s surprisingly easy to prepare. You make the sauce from sautéed fresh red tomatoes and then top the dish with fresh yellow garden tomatoes. Colorful, healthy and flavorful.

Carmen’s Kitch adapts this Asian inspired recipe from Slender Kitchen. The sriracha and hoisin sauce give spaghetti squash a nice kick, and vegetarians can easily substitute the ground turkey with meat alternatives or leave it out entirely.

We’ve seen spaghetti squash as pizza crust, so it’s no surprise that it’s the crust in this delicious recipe from Tasty Kitchen for asparagus quiche. Brilliant!

This recipe from I Breathe… I’m Hungry… looks decadent but it’s actually low carb and gluten-free, thanks to the spaghetti squash.

Cookin’ Canuck wanted to do something different with spaghetti squash. Some Swiss chard, dried cranberries and Dijon vinaigrette turned created this light, refreshing side dish, which is still perfect for fall.

iFoodReal had us at avocado and egg.

Dolly and Oatmeal’s recipe for these spag squash cakes is gluten- and dairy-free, and you seriously won’t miss the dairy — not with that sriracha and avocado sauce, which complements these baked cakes nicely. Who says healthy needs to be boring? Pfft.

This Paleo and vegan-friendly recipe from Grok Grub almost looks like it can be a summer dish, doesn’t it? It’s certainly light and refreshing, but thanks to the spaghetti squash, greens and cashews, it’s quite filling.

You don’t have to wait until Passover to enjoy this delicious recipe for kugel from Cara’s Cravings. And we love that it’s perfect for breakfast, too. Bonus? It’s gluten- and refined sugar-free, and you won’t miss the sugar because oh my goodness the apples and raisins. Drool…

And we’re back to savory and then some with this recipe from Making Nice in the Midwest. Go on and roast extra chickpeas to enjoy as a snack after you enjoy this curry.

We couldn’t resist this recipe from Healthy Delicious for Cajun-stuffed spaghetti squash. It’s vegan, dairy- and egg-free and depending on the spices you use, gluten-free, too. And as Healthy Delicious aptly points out, it’s so scrumptious that everyone, even those without dietary restrictions, is bound to enjoy it.