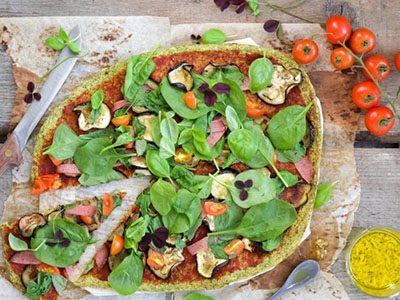 Choosing the healthiest toppings is just one way to make a better-for-you pizza. Start your meal makeover from the bottom up by swapping your typical crust with these creative substitutes.

The most well-known of the veggie crusts, cauliflower is a popular option for gluten-free and Paleo eaters, as well as omnivores who just want to fit more vegetables into their diet. This recipe from Table.io creates a thin, crunchy crust strong enough to hold your toppings but light enough to ward off post-meal guilt.

Everyone’s (second) favorite fall vegetable can also build the foundation of your pizza. Unlike the cauliflower crust, this recipe from Farm Fresh Eats isn’t a low-carb substitute, but it gives a typically unhealthy food an antioxidant boost, thanks to the beta-carotene in the sweet potatoes. If you’re looking for a gluten-free alternative, try this recipe from CallieEngland.com.

This zucchini crust from Kalyn’s Kitchen is made in a similar way as the cauliflower pizza crust. The zucchini is grated, drained and, in this case, combined with mozzarella, almond meal, Parmesan, oregano, garlic powder, salt and egg.

Even butternut squash is getting in on the pizza action. Empowered Sustenance swears this recipe is the easiest grain-free pizza crust you’ll ever make. It requires only 10 minutes of prep time and is suitable for Paleo, dairy-free and gluten-free eaters.

It might not fit most people’s traditional concept of the crispy, crunchy pizza crust, but these eggplant pizzas from Closet Cooking are absolutely delicious (and kid-friendly)! Plus, at only 212 calories per serving, we can deal with a crunchless crust.

Need to use up the rest of your potatoes before they go bad? Try this Idaho potato crusted pizza recipe from What’s Cooking America and top with lots of veggies for a nutritious meal.

Kimi Harris at Mother Nature Network found a great way to add some protein to pizza (without adding meat). She made the crust out of quinoa blended with water, spices, oil, salt and coconut flour.

Unlike many of the recipes in this list, this pumpkin pizza dough from Take A Megabite uses flour to achieve the kind of fluffy crust typically associated with pizza. The difference is that it’s also loaded with canned pumpkin.

This pizza crust from Better With Veggies isn’t much different from what you order at your local pizza joint — it just has nutrient-rich leafy greens in the dough. Kids (and stubborn significant others) won’t even notice.

These personal polenta pizzas from Edible Perspective are a fun — and surprisingly satisfying — way to switch up pizza night. Polenta, which is made from cornmeal, is a great source of iron, magnesium, phosphorus, zinc and vitamin B6.

Unusual? Absolutely. But this spaghetti squash pizza crust from Delighted Momma is actually delicious (and man-approved). All you need for the crust is spaghetti squash, an egg, garlic salt, mozzarella cheese and flax meal.

Also known as socca, this pancake-like flatbread — which Healthy In Candy Land has used as a pizza crust — consists of chickpea flour (made from ground chickpeas), spices and water.

If cauliflower can be made into a pizza crust, why not broccoli? This recipe from A Tasty Love Story creates a nutritious base for your pizza toppings from broccoli, onions, garlic and eggs.